Hanapepe or Hanapēpē is a historic, unincorporated community in Kauai County, Hawaii, United States. The name means "crushed bay" in Hawaiian, which may refer to landslides in the area. For statistical purposes, the United States Census Bureau has defined Hanapepe as a census-designated place (CDP). The population was 2,678 at the 2020 census, up from 2,153 at the 2000 census. 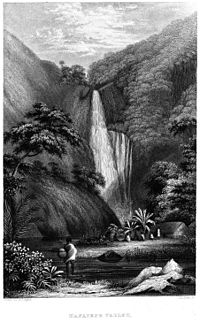 The Hanapepe Valley as drawn by Alfred Thomas Agate

Hanapepe was one of the locations visited by the United States Exploring Expedition under Charles Wilkes; the expedition arrived in Hawaii in late September, 1840, and spent some time in the islands. It is one of the few towns on the island that was not created by the sugarcane plantations. In the 1920s, a deadly labor battle, later dubbed the Hanapepe Massacre, occurred in Hanapepe.

On August 27, 1980, Douglas Kenney, a co-writer of National Lampoon's Animal House, fell thirty feet to his death from the Hanapepe Lookout.

Hanapepe is the headquarters location for the ice cream company Lappert's Hawaii, as well as home to the westernmost bookstore in the United States, The Bookstore - Talk Story. It was the inspiration for Kokaua Town, the fictional hometown of the main characters in the Disney animated film Lilo & Stitch and its related franchise (the town was not named until Lilo & Stitch: The Series). 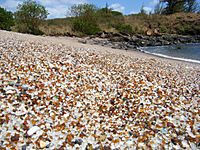 Glass Beach, in the industrial side of Hanapepe

There were 706 households, out of which 41.8% had children under the age of 18 living with them, 57.2% were married couples living together, 12.3% had a female householder with no husband present, and 24.4% were non-families. 19.8% of all households were made up of individuals, and 8.6% had someone living alone who was 65 years of age or older. The average household size was 3.05 and the average family size was 3.54.

The main street has plantation-style buildings built in the 1930s and ’40s that house art galleries, eateries and boutiques. Hanapepe is the headquarters location for the ice cream company Lappert's Hawaii, as well as home to the westernmost bookstore in the United States, The Bookstore - Talk Story.

All content from Kiddle encyclopedia articles (including the article images and facts) can be freely used under Attribution-ShareAlike license, unless stated otherwise. Cite this article:
Hanapepe, Hawaii Facts for Kids. Kiddle Encyclopedia.