Waimea (literally, "red water" in Hawaiian) is a census-designated place (CDP) in Kauaʻi County, Hawaiʻi, United States. The population was 1,855 at the 2010 census. The first Europeans to reach Hawaii landed in Waimea in 1778 (giving rise to Kauai's cheeky slogan: "Hawaii's Original Visitor Destination").

Between 200 to 600 AD, the first settlers arrived in Kaua‘i from the Marquesas Islands. It is not clear why the voyagers sought a new homeland—whether they were escaping war, famine, or were simply driven by the desire to explore. Along with them, they brought taro, sweet potato, pigs and fowl, as well as seeds. They were experienced farmers and fishermen, with advanced irrigation techniques that allowed them to thrive on the land.

Around 1000 AD, Tahitian explorers arrived in Hawai‘i and conquered the Marquesans. According to Hawaiian legend, the small-in-stature Marquesans were chased into the hills by the Tahitians, and became the "Menehune," thought to be responsible for bad luck. The Tahitians brought with them a social and political hierarchy with distinct rules and taboos, also called "kapu." It was forbidden for women and men to eat together, for women to eat pork or bananas, or for anyone to step on the shadow of a royal member. This kapu system, with kings (ali‘i) thrived and ruled for hundreds of years before Western explorers first made contact in the Islands.

On January 20, 1778, the British explorer, Captain James Cook, and his ships, the HMS Discovery and Resolution, arrived at the mouth of the Waimea River on the Western side of Kaua‘i. Originally, Cook sent three small craft to Waimea so that his men could determine if it was a good place for the ships to dock. They reported back that there was a fresh water lagoon alongside a native village, so Cook and his men anchored their ships and went ashore on smaller craft.

Cook's mission is thought to be one of scientific and social exploration. His men documented the flora and fauna of the Waimea area, and tried to translate the language of the natives. This first encounter was relatively friendly. One of Cook's men wrote, "On landing I was reciev'd with every token of respect and friendship by a great number of the Natives who were collected upon the occasion; they every one of them prostrated themselves around me which is the first mark of respect at these Isles."

Cook's arrival, the first Western contact with Hawai‘i, is fraught with contradictions. While it was originally friendly and is responsible for a vast resource of information about the flora, fauna and culture of Hawai‘i, it also marks the beginning of the period of colonization of Hawai‘i and its people. The arrival of Europeans also introduced some diseases including tuberculosis, which is responsible for decimating the native Hawaiian population. 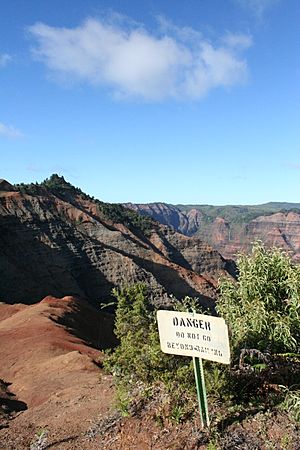 Along a ridgeline near Waimea 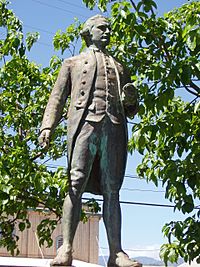 A statue of Captain James Cook stands in Waimea, Kauaʻi commemorating his first contact with the Hawaiian islands at the town's harbor in January 1778.

Waimea is a popular place for tourists, especially hikers who travel through the nearby canyons and ridges.

There were 620 households out of which 33.2% had children under the age of 18 living with them, 52.3% were married couples living together, 15.6% had a female householder with no husband present, and 26.3% were non-families. 22.1% of all households were made up of individuals and 10.5% had someone living alone who was 65 years of age or older. The average household size was 2.80 and the average family size was 3.27.

All content from Kiddle encyclopedia articles (including the article images and facts) can be freely used under Attribution-ShareAlike license, unless stated otherwise. Cite this article:
Waimea, Kauai County, Hawaii Facts for Kids. Kiddle Encyclopedia.