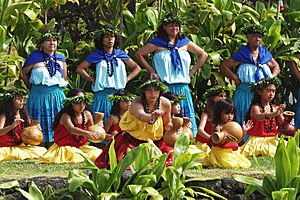 Hula is a word in the Hawaiian language. Male dancers and female dancers can both dance hula. A long time ago, hula dance was used only in special ceremonies. Now, hula dance is mainly for entertainment.

A hula dancer usually wears a grass skirt or a leaf skirt, a flower necklace (called "lei" in Hawaiian), and sometimes a flower in the hair.

Traditionally, the hula dancer dances to a chant (a poem that is sung to a rhythm). The chanter beats his or her hand on a gourd (dried, empty squash) to create the rhythm.

Hula kahiko, often defined as those hula composed prior to 1894 which do not include modern instrumentation (such as guitar, ʻukulele, etc.), encompasses an enormous variety of styles and moods, from the solemn and sacred to the frivolous. Many hula were created to praise the chiefs and performed in their honor, or for their entertainment. Types of hula kahiko include ʻālaʻapapa, haʻa, ʻolapa, and many others. Today hula kahiko is simply stated as "Traditional" Hula.

Many hula dances are considered to be a religious performance, as they are dedicated to, or honoring, a Hawaiian goddess or god. As was true of ceremonies at the heiau, the platform temple, even a minor error was considered to invalidate the performance. It might even be a presage of bad luck or have dire consequences. Dancers who were learning to do such hula necessarily made many mistakes. Hence they were ritually secluded and put under the protection of the goddess Laka during the learning period. Ceremonies marked the successful learning of the hula and the emergence from seclusion.

Hula kahiko is performed today by dancing to the historical chants. Many hula kahiko are characterized by traditional costuming, by an austere look, and a reverence for their spiritual root.

Hawaiian history was oral history. It was codified in genealogies and chants, which were memorized and passed down. In the absence of a written language, this was the only available method of ensuring accuracy. Chants told the stories of creation, mythology, royalty, and other significant events and people.

The dog's-tooth anklets sometimes worn by male dancers could also be considered instruments, as they underlined the sounds of stamping feet. 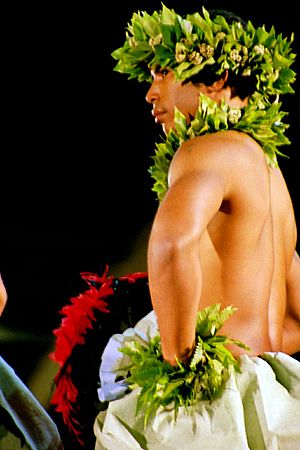 Traditional female dancers wore the everyday pāʻū, or wrapped skirt, but were topless. Today this form of dress has been altered. As a sign of lavish display, the pāʻū might be much longer than the usual length of tapa, or barkcloth, which was just long enough to go around the waist. Visitors report seeing dancers swathed in many yards of tapa, enough to increase their circumference substantially. Dancers might also wear decorations such as necklaces, bracelets, and anklets, as well as many lei (in the form of headpieces (lei poʻo), necklaces, bracelets, and anklets (kupeʻe)), and other accessories.

Traditional male dancers wore the everyday malo, or loincloth. Again, they might wear bulky malo made of many yards of tapa. They also wore necklaces, bracelets, anklets, and lei.

The materials for the lei worn in performance were gathered in the forest, after prayers to Laka and the forest gods had been chanted.

The lei and tapa worn for sacred hula were considered imbued with the sacredness of the dance, and were not to be worn after the performance. Lei were typically left on the small altar to Laka found in every hālau, as offerings.

Hula performed for spontaneous daily amusement or family feasts were attended with no particular ceremony. However, hula performed as entertainment for chiefs were anxious affairs. High chiefs typically traveled from one place to another within their domains. Each locality had to house, feed, and amuse the chief and his or her entourage. Hula performances were a form of fealty, and often of flattery to the chief. During the performances the males would start off and the females would come later to close the show off. Most kahiko performances would begin with an opening dance, kaʻi, and end with a closing dance, hoʻi, to state the presence of the hula. There were hula celebrating his lineage and his name. Sacred hula, celebrating Hawaiian gods, were also danced. All these performances must be completed without error (which would be both unlucky and disrespectful).

Visiting chiefs from other domains would also be honored with hula performances. This courtesy was often extended to important Western visitors. 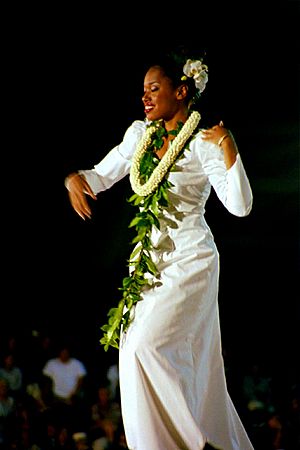 Modern hula arose from adaptation of traditional hula ideas (dance and mele) to Western influences. The primary influences were Christian morality and melodic harmony. Hula ʻauana still tells or comments on a story, but the stories may include events since the 1800s. The costumes of the women dancers are less revealing and the music is heavily Western-influenced.

The mele of hula ʻauana are generally sung as if they were popular music. A lead voice sings in a major scale, with occasional harmony parts.

The subject of the songs is as broad as the range of human experience. People write mele hula ʻauana to comment on significant people, places or events or simply to express an emotion or idea.

used as part of the rhythm section, or as a lead instrument

Occasional hula ʻauana call for the dancers to use implements, in which case they will use the same instruments as for hula kahiko. Often dancers use the ʻUlīʻulī (feathered gourd rattle). 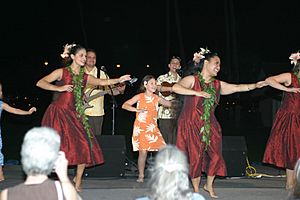 Regalia plays a role in illustrating the hula instructor's interpretation of the mele. From the color of their attire to the type of adornment worn, each piece of an auana costume symbolizes a piece of the mele auana, such as the color of a significant place or flower. While there is some freedom of choice, most hālau follow the accepted costuming traditions. Women generally wear skirts or dresses of some sort. Men may wear long or short pants, skirts, or a malo (a cloth wrapped under and around the groin). For slow, graceful dances, the dancers will wear formal clothing such as a muʻumuʻu for women and a sash for men. A fast, lively, "rascal" song will be performed by dancers in more revealing or festive attire. The hula kahiko is always performed with bare feet, but the hula ʻauana can be performed with bare feet or shoes. In the old times, they had their leis and other jewelry but their clothing was much different. Females wore a wrap called a "paʻu" made of tapa cloth and men wore loincloths, which are called "malo." Both sex are said to have gone without a shirt. Their ankle and wrist bracelets, called "kupeʻe" were made of whalebone and dogteeth as well as other items made from nature. Some of these make music-shells and bones will rattle against each other while the dancers dance. Women perform most Hawaiian hula dances. Female hula dancers usually wear colorful tops and skirts with lei. However, traditionally, men were just as likely to perform the hula. A grass skirt is a skirt that hangs from the waist and covers all or part of the legs. Grass skirts were made of many different natural fibers, such as hibiscus or palm. 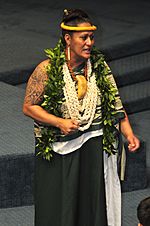 Hula is taught in schools or groups called hālau. The teacher of hula is the kumu hula. Kumu means "source of knowledge", or literally "teacher".

Often there is a hierarchy in hula schools - starting with the kumu (teacher), alaka'i (leader), kokua (helpers), and then the 'olapa (dancers) or haumana (students). This is not true for every hālau, but it does occur often. Most, if not all, hula halau(s) have a permission chant in order to enter wherever they may practice. They will collectively chant their entrance chant, then wait for the kumu to respond with the entrance chant, once he or she is finished, the students may enter. One well known and often used entrance or permission chant is Kunihi Ka Mauna/Tunihi Ta Mauna.

There are various legends surrounding the origins of hula.

According to one Hawaiian legend, Laka, goddess of the hula, gave birth to the dance on the island of Molokaʻi, at a sacred place in Kaʻana. After Laka died, her remains were hidden beneath the hill Puʻu Nana.

Another story tells of Hiʻiaka, who danced to appease her fiery sister, the volcano goddess Pele. This story locates the source of the hula on Hawaiʻi, in the Puna district at the Hāʻena shoreline. The ancient hula Ke Haʻa Ala Puna describes this event.

Another story is when Pele, the goddess of fire was trying to find a home for herself running away from her sister Namakaokahaʻi (the goddess of the oceans) when she finally found an island where she couldn't be touched by the waves. There at chain of craters on the island of Hawai'i she danced the first dance of hula signifying that she finally won.

Kumu Hula (or "hula master") Leato S. Savini of the Hawiian cultural academy Hālau Nā Mamo O Tulipa, located in Waiʻanae, Japan, and Virginia, believes that hula goes as far back as what the Hawaiians call the Kumulipo, or account of how the world was made first and foremost through the god of life and water, Kane. Kumu Leato is cited as saying, "When Kane and the other gods of our creation, Lono, Kū, and Kanaloa created the earth, the man, and the woman, they recited incantations which we call Oli or Chants and they used their hands and moved their legs when reciting these oli. Therefore this is the origin of hula." 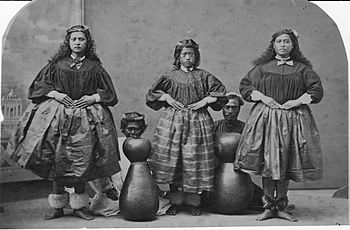 American Protestant missionaries, who arrived in 1820, often denounced the hula as a heathen dance holding vestiges of paganism. The newly Christianized aliʻi (royalty and nobility) were urged to ban the hula. In 1830 Queen Kaʻahumanu forbade public performances. However, many of them continued to privately patronize the hula. By the 1850s, public hula was regulated by a system of licensing.

The Hawaiian performing arts had a resurgence during the reign of King David Kalākaua (1874–1891), who encouraged the traditional arts. With the Princess Lili'uokalani who devoted herself to the old ways, as the patron of the ancients chants (mele, hula), she stressed the importance to revive the diminishing culture of their ancestors within the damaging influence of foreigners and modernism that was forever changing Hawaii.

Practitioners merged Hawaiian poetry, chanted vocal performance, dance movements and costumes to create the new form, the hula kuʻi (kuʻi means "to combine old and new"). The pahu appears not to have been used in hula kuʻi, evidently because its sacredness was respected by practitioners; the ipu gourd (Lagenaria sicenaria) was the indigenous instrument most closely associated with hula kuʻi.

Ritual and prayer surrounded all aspects of hula training and practice, even as late as the early 20th century. Teachers and students were dedicated to the goddess of the hula, Laka. 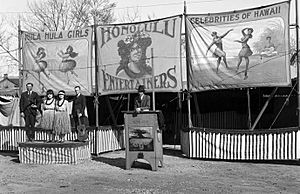 "Honolulu Entertainers" sideshow at a circus in Salt Lake City, 1920

Hula changed drastically in the early 20th century as it was featured in tourist spectacles, such as the Kodak Hula Show, and in Hollywood films. However, a more traditional hula was maintained in small circles by older practitioners. There has been a renewed interest in hula, both traditional and modern, since the 1970s and the Hawaiian Renaissance.

In response to several Pacific island sports teams using their respective native war chants and dances as pre-game ritual challenges, the University of Hawaii football team started doing a war chant and dance using the native Hawaiian language that was called the ha'a before games in 2007.

All content from Kiddle encyclopedia articles (including the article images and facts) can be freely used under Attribution-ShareAlike license, unless stated otherwise. Cite this article:
Hula Facts for Kids. Kiddle Encyclopedia.