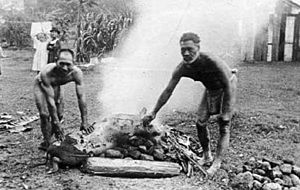 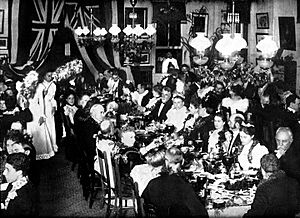 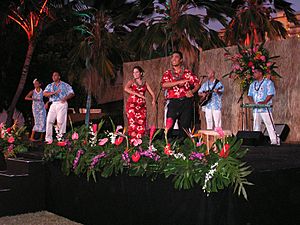 Dancers and musicians at a commercial lūʻau

A luau (Hawaiian: lūʻau) is a traditional Hawaiian party or feast that is usually accompanied by entertainment. It may feature food such as poi, Kalua pig, poke, lomi salmon, opihi, haupia and beer, and entertainment such as traditional Hawaiian music and hula. Among people from Hawaiʻi, the concepts of "luau" and "party" are often blended, resulting in graduation luau, wedding luau and birthday luau. 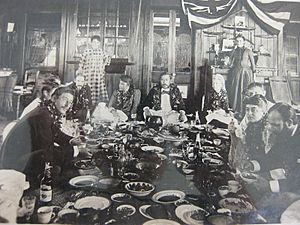 In ancient Hawaiʻi, men and women ate their meals separately; also women and the rest of society were not allowed to eat foods that were not common or foods that were only served during special occasions. However, in 1819, King Kamehameha II removed all the religious laws that were practiced. King Kamehameha II performed a symbolic act by eating with the women, thus ending the Hawaiian religious taboos. This is when the lūʻau parties were first created. 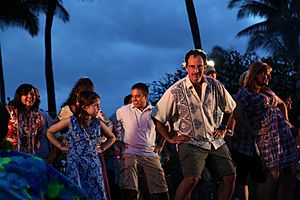 People dancing at a lūʻau

Earlier, such a feast was called a pāʻina or ʻahaʻaina. The modern name comes from that of a food often served at a luau; squid or chicken lūʻau, which consist of meat, lūʻau (or taro) leaves, and coconut milk. The main dish of the luau is Kālua pig, cooked in an imu (earth oven). Another dish that is served is poi, made from the roots of taro. This feast was usually served on the floor; on the mats there were usually large centerpieces. In most cases the centerpieces were made of tī leaves. Utensils were never present during a luau; everything was eaten by hand. For example, poi received its name from the number of fingers needed to eat it: "three-finger, two-finger, or the thickest, one-finger poi".

A traditional luau consists of food such as:

Luau-themed or Hawaiian-themed parties vary in their range of dedication to Hawaiian traditions. For example, some extravagant affairs go so far as to ship food from the islands, while others settle for artificial lei, maitais, and a poolside atmosphere.

To have a luau-themed party, it is essential to have an open area, such as a backyard, because luau are celebrated under large tents in outdoor areas. Also a lei is a very common item in a luau. A lei is a necklace of flowers, ferns, or kukui nuts that men and women wear. At luau-themed parties, the guests can make their own lei or they can be bought. At these types of parties entertainment is a must. The instruments used are typically the ukulele and the drums. There are also dancers.

All content from Kiddle encyclopedia articles (including the article images and facts) can be freely used under Attribution-ShareAlike license, unless stated otherwise. Cite this article:
Luau Facts for Kids. Kiddle Encyclopedia.