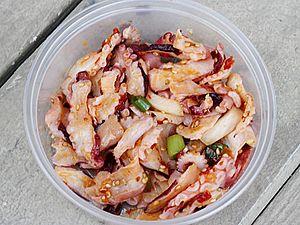 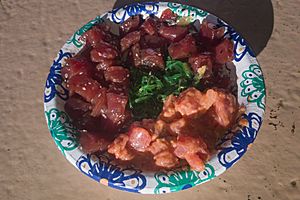 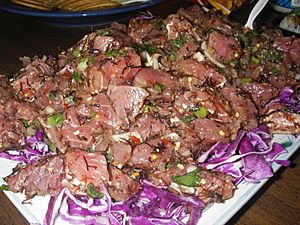 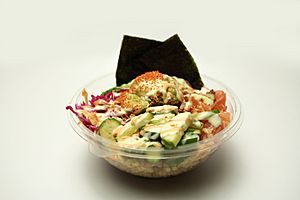 Poke (Hawaiian for "to slice" or "cut crosswise into pieces"; sometimes stylized 'poké' to aid pronunciation) is diced raw fish served either as an appetizer or a main course and is one of the main dishes of Native Hawaiian cuisine. Traditional forms are aku (skipjack tuna) and heʻe (octopus). Heʻe (octopus) poke is usually called by its Japanese name tako poke, except in places like the island of Niʻihau where the Hawaiian language is spoken. Increasingly popular ahi poke is made with yellowfin tuna. Adaptations may feature raw salmon or various shellfish as a main ingredient served raw with the common poke seasonings. Poke differs from other raw fish dishes like ceviche, kinilaw or umai in that it does not use citrus fruits as a curing agent.

The traditional Hawaiian poke consists of fish that has been gutted, skinned, and deboned. It is served with traditional condiments such as sea salt, candlenut, seaweed, and limu.

According to the food historian Rachel Laudan, the present form of poke became popular around the 1970s. It used skinned, deboned, and filleted raw fish served with Hawaiian salt, seaweed, and roasted, ground candlenut meat. This form of poke is still common in the Hawaiian islands.

Beginning around 2012, poke became increasingly popular in North America. From 2014 to mid-2016, "the number of Hawaiian restaurants on Foursquare, which includes those that serve poke," doubled, going from 342 to 700. These restaurants serve both traditional and modern versions of the dish. The modern version is sometimes called poké bowl, and has the ingredients arranged in a grouped way rather than mixed. Variations may include avocado, ponzu sauce, teriyaki sauce, mushrooms, crispy onions, pickled jalapeño, sriracha sauce, cilantro, pineapple, or cucumber. Unlike traditional Hawaiian poke, the mainland style is typically not pre-marinated, but is instead prepared with sauces on demand. Contemporary poke restaurants are mostly—but not exclusively—fast casual style restaurants where the dish is fully customizable from the base to the marinade on the fish. They may use other seafood but ahi tuna is the most popular.

There is a three-day "I Love Poke" festival to celebrate the dish and its many variations.

Poke began with fishermen seasoning the cut-offs from their catch to serve as a snack. While poke is a regional American-based cuisine from Hawaii, traditional poke seasonings have been heavily influenced by Japanese and other Asian cuisines. These include soy sauce, green onions, and sesame oil. Others include furikake (mix of dried fish, sesame seeds, and dried seaweed), chopped dried or fresh chili pepper, limu (seaweed), sea salt, inamona (roasted, crushed and salted candlenut), fish eggs, wasabi, and Maui onions. Other variations of poke may include cured heʻe (octopus), other types of raw tuna, raw salmon and various kinds of shellfish. 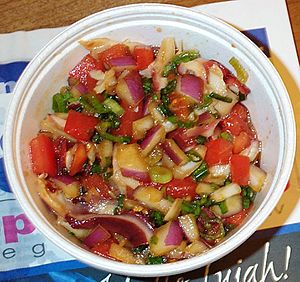 Poke is similar to other Polynesian fish salads such as ika mata in the Cook Islands, kokoda in Fiji, oka in Samoa and 'ota 'ika in Tonga.

A very similar dish is the kinilaw of the Philippines, known as the "Philippine ceviche". Kinilaw is usually raw diced fish marinated in citrus juice, sour fruits, or vinegar with extracts from mangrove bark or fruits (and sometimes coconut milk). It is indigenous to the islands, with traces recovered from archaeological sites dated to the 10th to 13th centuries AD. This process can also be applied to other seafood and lightly blanched or grilled meat (the latter being generally differentiated as kilawin). The dish was introduced to Guam during the Spanish colonial period, resulting in the derivative Chamorro dish of kelaguen.

The Ilocano dish poqui poqui of the Philippines also likely derived its name from poke, after the influx of Ilocano sugarcane workers to Hawaii during the American colonization of the Philippines. However, they are very different dishes, with poqui poqui being a scrambled egg dish with grilled eggplants and tomatoes.

All content from Kiddle encyclopedia articles (including the article images and facts) can be freely used under Attribution-ShareAlike license, unless stated otherwise. Cite this article:
Poke (Hawaiian dish) Facts for Kids. Kiddle Encyclopedia.