Asparagopsis taxiformis, (red sea plume or limu kohu) formerly A. sanfordiana, is a species of red algae, with cosmopolitan distribution in tropical to warm temperate waters.

Like many red algae, A. taxiformis has a haplodiplophasic lifecycle, with each phase morphologically distinct. The species' haploid stage was initially described as Falkenbergia hillebrandii (Bornet) Falkenberg 1901 because it was thought to be a separate species. 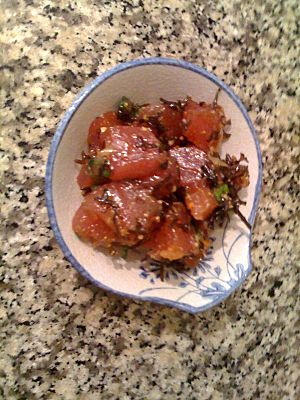 Asparagopsis is one of the most popular types of limu. in the cuisine of Hawaii, it is principally a condiment. It is known as Limu kohu in the Hawaiian language meaning "pleasing seaweed". Limu kohu has a bitter taste, somewhat reminiscent of iodine, and is a traditional ingredient in poke.

The essential oil of limu kohu is 80% bromoform (tri-bromo-methane) by weight, and includes many other bromine- and iodine-containing organic compounds.

In 2014, researchers at CSIRO and James Cook University demonstrated that feeding ruminants a diet containing one to two percent red seaweed reduced their methane emissions by over 90 percent. Of 20 types of seaweed tested, A. taxiformis showed the most promise, with nearly 99 percent effectiveness. The findings spurred interest from leading academic and trade organizations to further investigate its effects on ruminant animal production. Some findings of research on these effects have been that the dichloromethane extract (found in A. taxiformis) was the most potent bioactive, reducing methane production by 79%. Other bioactives found were bromoform, dibromochloromethane, bromochloroacetic acid and dibromoacetic acid. 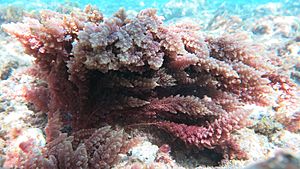 A. taxiformis in its habitat on the bottom of the ocean.

Supply from wild harvest is not expected to be adequate to support broad adoption. A. taxiformis has yet to be commercially farmed at scale. A research/development initiative called Greener Grazing is seeking to close the life cycle of A. taxiformis and demonstrate ocean based grow-out. A startup out of KTH Royal Institute of Technology; Volta Greentech and Symbrosia from Yale University, are both working to grow A. taxiformis. Symbrosia is looking to integrate the cultivation with whiteleg shrimp on land, using a patent-pending technology. Sea-based cultivation has been proposed as a path to scale production and "drive the cost down so it can be used by beef and dairy farmers around the world".

In 2020, FutureFeed won a Food Planet Prize worth $1million for an Asparagopsis product that reduces methane emissions in livestock. 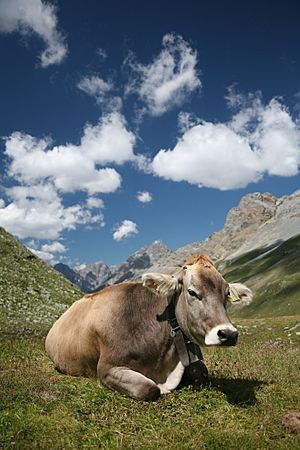 Cows burp tons of the Greenhouse Gas methane that comes from their foregut fermentation, but, if only a small percentage of their diet is A. taxiformis, this is greatly reduced.

All content from Kiddle encyclopedia articles (including the article images and facts) can be freely used under Attribution-ShareAlike license, unless stated otherwise. Cite this article:
Asparagopsis taxiformis Facts for Kids. Kiddle Encyclopedia.