The Commonwealth Scientific and Industrial Research Organisation (CSIRO) is the federal government agency for scientific research in Australia. Its chief role is to improve the economic and social performance of industry, for the benefit of the community. CSIRO works with leading organisations around the world, and CSIRO Publishing issues journals with the latest research by leading scientists on a broad range of subjects.

Notable developments by CSIRO have included the invention of atomic absorption spectroscopy, essential components of Wi-Fi technology, development of the first commercially successful polymer banknote, the invention of the insect repellent in Aerogard and the introduction of a series of biological controls into Australia, such as the introduction of myxomatosis and rabbit calicivirus for the control of rabbit populations. 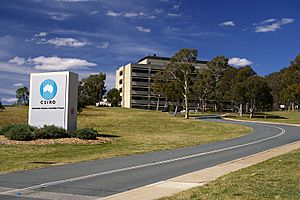 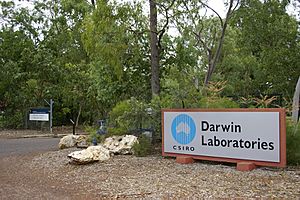 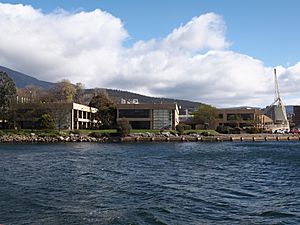 From its headquarters in Canberra, CSIRO maintains more than 50 sites across Australia and biological control research stations in France and Mexico, employing about 5000 in total. The primary roles of CSIRO include contributing to meeting the objectives and responsibilities of the Australian government and providing new ways to benefit the Australian community and the economic and social performance of a number of industry sectors through research and development. CSIRO works with leading organisations around the world, and CSIRO Publishing publishes journals presenting the latest research by leading Australian and overseas scientists and covering a broad range of subjects.

The CSIRO "Flagship" initiative was originally designed to integrate, focus and direct national scientific resources. In May 2005, the government announced the launch of CSIRO's $97 million Flagship Collaboration Fund, which is intended to encourage cooperative research between universities, CSIRO and other research agencies. In July 2014, all research "Divisions" and Flagships were merged into ten research flagships.

The ten research flagships are:

In addition, CSIRO is a participant in a number of joint ventures, including:

CSIRO's Air Quality Modelling and Dispersion Team is a part of the Marine and Atmospheric Research division.

Some of the widely used air-quality dispersion models developed by CSIRO are:

A precursor to CSIRO, the Advisory Council of Science and Industry, was established in 1916 at the initiative of prime minister Billy Hughes. However, the Advisory Council struggled with insufficient funding during the First World War. In 1920 the Council was renamed the "Commonwealth Institute of Science and Industry", and was led by George Handley Knibbs (1921–26), but continued to struggle financially.

In 1926 The Science and Industry Research Act replaced the Institute with the 'Council for Scientific and Industrial Research' (CSIR). The CSIR was structured to represent the federal structure of Australian government, and had state-level committees and a central council. As well as this improved structure, the CSIR benefited from strong bureaucratic management under George Julius, David Rivett, and Arnold Richardson. CSIR research focussed on primary and secondary industries. Early in its existence, it established divisions studying animal health and animal nutrition. After the depression, the CSIR extended into secondary industries such as manufacturing.

CSIRO today has expanded into a wider range of scientific inquiry. This expansion began with the evolution of CSIR to the CSIRO by the Ben Chifley Labor government in 1949 which amended the Science and Industry Research Act, under which CSIRO continues to operate. The amendment enlarged and reconstituted the organisation and its administrative structure. Under Ian Clunies Ross as chairman, CSIRO pursued new areas such as radioastronomy and industrial chemistry.

Notable inventions and breakthroughs by CSIRO include:

CSIRO's research into ICT technologies has resulted in advances such as the Panoptic search engine (now known as Funnelback) and Annodex.

In October 2005, the journal Nature announced CSIRO scientists had developed near-perfect rubber from resilin, the elastic protein which gives fleas their jumping ability and helps insects fly. On 19 August 2005, CSIRO and the University of Texas at Dallas announced they were able to make transparent carbon nanotube sheets that will bring carbon nanotube products to the masses.

CSIRO had a pioneering role in the scientific discovery of the universe through radio "eyes". A team led by Paul Wild built and operated (from 1948) the world’s first solar radiospectrograph, and from 1967 the 3-kilometre-diameter (1.9 mi) radioheliograph at Culgoora in New South Wales. For three decades, the Division of Radiophysics had a world-leading role in solar research, attracting prominent solar physicists from around the world.

CSIRO owned the first computer in Australia, CSIRAC, built as part of a project began in the Sydney Radiophysics Laboratory in 1947. The CSIR Mk 1 ran its first program in 1949, the fifth electronic computer in the world. It was over 1,000 times faster than the mechanical calculators available at the time. It was decommissioned in 1955 and recommissioned in Melbourne as CSIRAC in 1956 as a general purpose computing machine used by over 700 projects until 1964. The CSIRAC is the only surviving first-generation computer in the world.

Between 1965 and 1985, George Bornemissza of CSIRO's Division of Entomology founded and led the Australian Dung Beetle Project. Bornemissza, upon settling in Australia from Hungary in 1951, noticed that the pastureland was covered in dry cattle dung pads which did not seem to be recycled into the soil and caused areas of rank pasture which were unpalatable to the cattle. He proposed that the reason for this was that native Australian dung beetles, which had co-evolved alongside the marsupials (which produce dung very different in its composition from cattle), were not adapted to utilise cattle dung for their nutrition and breeding since cattle had only relatively recently been introduced to the continent in the 1880s. The Australian Dung Beetle Project sought, therefore, to introduce species of dung beetle from South Africa and Europe (which had co-evolved alongside bovids) in order to improve the fertility and quality of cattle pastures. Twenty-three species were successfully introduced throughout the duration of the project and also had the effect of reducing the pestilent bush fly population by 90%.

CSIRO was the first Australian organisation to start using the Internet and was able to register the second-level domain csiro.au (as opposed to csiro.org.au or csiro.com.au). Guidelines were introduced in 1996 to regulate the use of the .au domain.

In 1997 Macquarie University professor David Skellern and his colleague Neil Weste established the company Radiata, Inc., which took a nonexclusive licence to the CSIRO patent for the purpose of developing commercially viable integrated circuit devices implementing the patented technology.

On 14 July 2011, Greenpeace activists vandalised a crop of GM wheat, circumventing the scientific trials being undertaken. Greenpeace was forced to pay reparations to CSIRO of $280,000 for the criminal damage, and were accused by the sentencing judge, Justice Hilary Penfold, of cynically using junior members of the organisation with good standing to avoid custodial sentences, while the offenders were given 9-month suspended sentences.

Following the attack Greenpeace criticised CSIRO for a close relationship with industry that had led to an increase in genetically modified crops, even though a core aim of CSIRO is Cooperative Research "working hand in hand with industry [to] build partnerships and engage with industry to generate impact".

All content from Kiddle encyclopedia articles (including the article images and facts) can be freely used under Attribution-ShareAlike license, unless stated otherwise. Cite this article:
Commonwealth Scientific and Industrial Research Organisation Facts for Kids. Kiddle Encyclopedia.