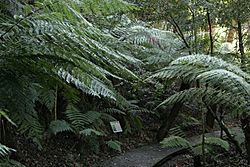 The Australian National Botanic Gardens (ANBG) are in Canberra. They are under the control of the Australian Government's Department of the Environment and Heritage.

The botanic gardens are the largest living collection of native Australian plants. The garen was set up to study and promote Australia's plants. The garden keeps a wide variety of resources for researchers and grows native plants threatened in the wild.

History of the Gardens

The Advisory Council of Federal Capital Territory recommended the setting up of a National Botanic Garden in 1933. A large site for the gardens was set aside on Black Mountain. In September 1949, the first trees were planted by Prime Minister Ben Chifley and Director of Kew Gardens, Sir Edward Salisbury. The Gardens were officially opened in October 1970 by Prime Minister John Gorton.

The Gardens has over 90 ha (222 acres) on Black Mountain. About 40 ha (99 acres) have been used for the Botanic Gardens. Plans for the development of the remaining land are on hold until money is available.

The gardens is organised in sections; plants are grouped by shared taxonomy or are presented in groupings that exist in nature. More than 5,500 species are cultivated. Displays include:

Research at the Gardens

The Gardens manages several large plant databases, including What's its Name? This is a simple point of access to the more complex 'Australian Plant Name Index' APNI listing all the scientific names ever used for Australia's plants. A large collection of photographs is also available.

The Gardens' library has important collections of botanical books, journals, CD-ROMs and maps. The library is open to students and the public by appointment.

All content from Kiddle encyclopedia articles (including the article images and facts) can be freely used under Attribution-ShareAlike license, unless stated otherwise. Cite this article:
Australian National Botanic Gardens Facts for Kids. Kiddle Encyclopedia.