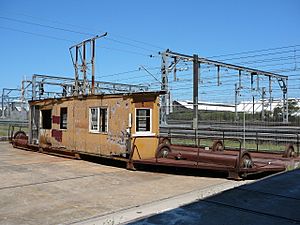 Eveleigh is an inner-city suburb of Sydney, in the state of New South Wales, Australia. Eveleigh is located about 3 kilometres south of the Sydney central business district and is part of the local government area of the City of Sydney.

Following the nationalisation of failed private railways, construction began in the early 1880s on a new workshops complex, occupying an area of over 60 acres (240,000 m2), bounded by North Newtown, Darlington, Erskineville, Redfern, Alexandria and Chippendale. Originally the workshops serviced and repaired the growing NSW rail fleet, but in 1908 Eveleigh began manufacturing steam locomotives. By this time more than 3000 people were employed at the site. Many workers lived in the area, but many lived in other suburbs and until the 1980s commuting workers alighted at the purpose-built Macdonaldtown Station, located in the middle of the complex.

Included in the complex was a running shed, opened in 1884, for steam locomotives used in the daily duties of train haulage. Originally of three bays, the first was demolished about 1925 and the remaining two in the early 1960s.

In 1989, part of the site was used to house Paddy's Markets, while the original site at Haymarket was being redeveloped.

The Eveleigh Railway Workshops are of great significance to Australia's industrial, military and social history. Eveleigh manufactured the first steam locomotives made in Australia, and it contains the most complete set of late nineteenth and early twentieth century light and medium engineering technologies in Australia (much of which is now preserved in an industrial museum in Bays 1 and 2 of the old Locomotive Workshop). The Eveleigh site was also used to manufacture munitions in both World War I and World War II. It is also significant in the history of Australian unionism—in 1892 unions successfully negotiated to establish a six-day working week, and the 1917 General Strike, which began with the 3000 workers at Eveleigh, eventually spread across Australia, involving almost 100,000 nationwide. The locomotive workshop was closed in 1988 and the main rail workshops were moved to Enfield. 3801 Limited has occupied the Large Erecting Shop since 1986.

In 1991, the NSW Government established a consortium including the University of Sydney, University of Technology, Sydney and UNSW which transformed Alexandria side of the workshops site into the Australian Technology Park. Another section of the old workshops, which faces onto Wilson St, has recently been converted into a large theatre space.

Australian Technology Park occupies the site of the former Eveleigh railway yards. It is the home of a growing community of researchers, entrepreneurs, incubator businesses, start-ups, mature technology companies and education organisations.

The ATP buildings are also frequently used as locations for advertisements and television programs including MasterChef Australia. So You Think You Can Dance and the auditions of Australian Idol. The ATP site will also soon house extensive film and television production facilities including a new digital film making studio built by production company Kennedy Miller Mitchell for the filming of Mad Max 4 and Happy Feet 2. The Seven Network and outside broadcast company, Global Television are housed within four purpose-built high definition television studios.

All content from Kiddle encyclopedia articles (including the article images and facts) can be freely used under Attribution-ShareAlike license, unless stated otherwise. Cite this article:
Eveleigh, New South Wales Facts for Kids. Kiddle Encyclopedia.