Waterloo is an inner-city suburb of Sydney, New South Wales, Australia. Waterloo is located 3 kilometres (1.87 mi) south of the Sydney central business district and is part of the local government area of the City of Sydney. Waterloo is surrounded by the suburbs of Redfern and Darlington to the north, Eveleigh and Alexandria to the west, Rosebery to the south, and Moore Park, Zetland, and Kensington to the east. 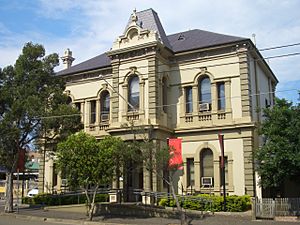 Waterloo took its name from the Battle of Waterloo in 1815, when Allied and Prussian forces under the Duke of Wellington and Blücher defeated the French forces under Napoleon Bonaparte.

In the 1820s Waterloo began supporting industrial operations including the Fisher and Duncan Paper Mill and the Waterloo Flour Mills owned by William Hutchinson and Daniel Cooper. William Hutchinson, superindendent of convicts and public works, had been granted 1,400 acres (5.7 km2) of land in 1823. He sold Waterloo Farm to Daniel Cooper (1785-1853) and Solomon Levey (1794-1833). Cooper later bought out Levey's share and on his death the Waterloo Estate passed onto his son, also named Daniel Cooper, who was the first speaker of the New South Wales Legislative Assembly.

Waterloo is historically a working class region. Since early 2000s, the region has undergone some degree of gentrification with a rising business district focusing on technology-oriented firms and the development of more green space such as parks. By 2006, median individual income in Waterloo was slightly higher than the Australian average. The suburb maintains numerous public housing apartments.

Waterloo is also a popular suburb to live for Sydney's large Gay and Lesbian population due to its closeness to nearby suburbs of Surry Hills and Darlinghurst.

The Waterloo Urban Conservation Area is a residential area of predominantly 19th century terrace and cottage housing. New development and redevelopment in this area is encouraged to be sympathetic to the existing heritage style. 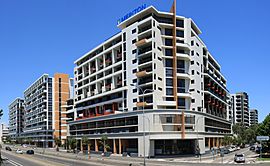 Green Square is a district in the south and east of the suburb including the suburbs of Waterloo and Zetland that is being redeveloped. It involves an urban renewal program which has seen many industrial buildings redeveloped or replaced by new residential and commercial developments. The area adjacent to South Dowling Street contains many high rise apartment buildings with retail space at ground level.

The Chatswood to Bankstown Sydney Metro City & Southwest line is currently under construction including Waterloo station is due to open in 2024. There will also be large commercial and residential redevelopment to service the new metro. 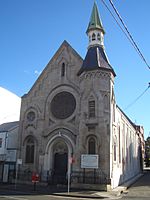 The Waterloo Skate Park, is a modern skate park and the first of its kind to copy the urban streetscape layout of popular skate spots like Martin Place and Cathedral Square in Sydney. The park is located next to Waterloo Oval and the South Sydney Youth Services building on Elizabeth Street.

All content from Kiddle encyclopedia articles (including the article images and facts) can be freely used under Attribution-ShareAlike license, unless stated otherwise. Cite this article:
Waterloo, New South Wales Facts for Kids. Kiddle Encyclopedia.