The Assembly has 93 members, elected by single-member constituency, which are commonly known as seats. Voting is by the optional preferential system. 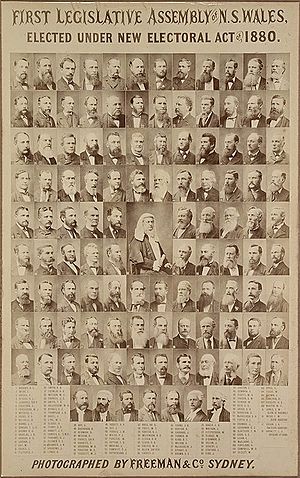 The Assembly is often called the bearpit on the basis of the house's reputation for confrontational style during heated moments and the "savage political theatre and the bloodlust of its professional players" attributed in part to executive dominance.

The Legislative Assembly was created in 1856 with the introduction of a bicameral parliament for the Crown Colony of New South Wales. In the beginning, only men were eligible to be members of the Assembly, and only around one half of men were able to pass the property or income qualifications required to vote. Two years later, the Electoral Reform Act, which was passed despite the opposition of the Legislative Council, saw the introduction of a far more democratic system, allowing any man who had been resident in the colony for six months the right to vote, and removing property requirements to stand as a candidate. Following Australia's federation in 1901, the New South Wales parliament became a State legislature. Women were granted the right to vote in 1902, and gained the right to be members of the Assembly in 1918, with the first successful candidate being elected in 1925.

Most legislation is initiated in the Legislative Assembly. The party or coalition with a majority of seats in the lower house is invited by the Governor to form government. The leader of that party subsequently becomes Premier of New South Wales, and their senior colleagues become ministers responsible for various portfolios. As Australian political parties traditionally vote along party lines, most legislation introduced by the governing party will pass through the Legislative Assembly.

As with the federal parliament and other Australian states and territories, voting in the Assembly is compulsory for all those over the age of 18. Elections are held every four years on the fourth Saturday in March, exceptional circumstances notwithstanding, as the result of a 1995 referendum to amend the New South Wales Constitution.

All content from Kiddle encyclopedia articles (including the article images and facts) can be freely used under Attribution-ShareAlike license, unless stated otherwise. Cite this article:
New South Wales Legislative Assembly Facts for Kids. Kiddle Encyclopedia.