Green Square is a locality in the inner-east of Sydney, Australia, in the suburbs of Alexandria, Zetland, Waterloo, Rosebery and Beaconsfield. It is 4 km south of the Sydney central business district and is part of the local government area of the City of Sydney.

The “square” that gives Green Square its name is formed by the junction of Bourke Road, Botany Road and O'Riordan Street. Green Square railway station on the Airport & South Line is located at this junction.

The area is predominantly light industrial, with a small amount of high-density residential development. The area is undergoing one of the largest urban renewal projects undertaken in Australia. The urban renewal area spans 292 hectares. In 2012 the Lord Mayor said that, "Green Square would provide 20,000 new homes; 22,000 jobs; and house 40,000 new residents". 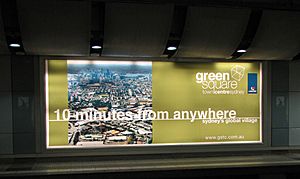 Green Square takes its name from a small park named in 1938 to honour Frederick Green, a Labor MP and tireless promoter of local industry and jobs who was a mayor of Alexandria.

In December 2007, construction work began on the Green Square town centre at the intersection of Botany Road, O'Riordan and Bourke Streets, with the demolition of the Waterloo Incinerator on the site. However the project moved slowly over the next few years. But in March 2012, the project entered a new phase. The Government announced that the dilapidated Joynton Smith building at the old Royal South Sydney hospital site had been torn down to kick start the A$8 billion project. As part of this stage, fourteen derelict buildings will be demolished by the end of 2012. Once the demolition is completed, work will start on community infrastructure, including a community hall, a community shed, artists' studios and workshops and a park.

In 2001 Landcom held an international planning competition to select a design for the Town Centre at Green Square. The team of Arets, Turner and McGregor won the competition in 2001 to masterplan the project. An LEP was subsequently prepared based on the competition winning design. In 2011 amendments to the LEP were drafted to suit the requirements of Leighton/Mirvac/Landcom who sought to increase the amount of development allowed. The amended LEP approved by the City of Sydney in 2012 included additional development height and bulk whilst increasing the amount of retail and commercial space. A new library and plaza is planned to be located near the Green Square railway station as part of the area's commercial and retail hub.

In 2007 the City of Sydney and Landcom engaged in an extensive community consultation with local residents to develop plans for two public plazas: an urban stream and a local park in the town centre. The designs prepared by McGregor Coxall and a large consultant team were well received by the community and a Development Application was approved by the City of Sydney in 2009. The design won a planning award from the Australian Institute of Landscape Architects in 2009.

In June 2012 another international design competition was launched for a $25 million library and the redesign of the approved $15 million plaza by the council. It is expected that the new Green Square library will be constructed in 2016–17. Five shortlisted architects were chosen by the jury to submit more detailed designs and in February 2013, the winning architect Stewart Hollenstein in association with Colin Stewart Architects, was announced.

Green Square railway station is an underground railway station served by the Airport, Inner West & South Line. The Lord Mayor is calling for Light Rail to be extended to the area.

All content from Kiddle encyclopedia articles (including the article images and facts) can be freely used under Attribution-ShareAlike license, unless stated otherwise. Cite this article:
Green Square, New South Wales Facts for Kids. Kiddle Encyclopedia.