Enfield is a suburb in the Inner West of Sydney, in the state of New South Wales, Australia. It is 11 kilometres south-west of the Sydney central business district in the local government area of Municipality of Burwood.

The suburb is named after Enfield Town, a suburb of London, England.

Before the arrival of the First Fleet in 1788, the Enfield area belonged to the Wangal people, a clan of the Eora tribe, which covered most of Sydney. In the early years, the Eora people were badly affected by smallpox, which arrived with the British. Many of the clans became unsustainably small and the survivors formed new bands who lived where they could. While it would be wrong to say that the local indigenous population gave no resistance to British land claims (Pemulwuy being a notable example), within thirty years or so of the colony's establishment, most of the land in the inner-west had been conceded to British settlers.

William Faithful was granted 100 acres (40 hectares) in 1810 covering what is now Enfield as well as much of Croydon Park and parts of Burwood and Croydon. In 1812, Liverpool Road was built through Faithful's land and the high position of Enfield made it a sensible spot for a staging post along the road. By the mid-1840s a small village had formed and the surrounding area supported vegetable gardening and a timber industry. St Thomas' Anglican Church was built in 1848 and is the oldest surviving building in the suburb. 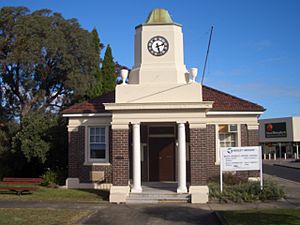 In 1853, a post office was built. This was the first recorded use of the name Enfield for the area although it may already have been unofficially known as that. In 1889, Enfield was deemed large enough to have its own municipal council which covered a larger area than the current suburb including those parts of the current Burwood and Strathfield councils south of Liverpool Rd. In 1891, its municipal population of 2,050 was larger than that of neighbouring Strathfield (1,850) and only just smaller than another neighbour Canterbury (2,426). Enfield retained its separate identity until 1949 when the NSW state government decided to abolish a number of small local councils by amalgamating them with their neighbours. Thus Enfield was absorbed into Burwood and Strathfield.

Enfield Olympic Pool, located in Henley Park is the oldest freshwater pool in Sydney, completed in 1933 and officially opened by Bertram Stevens, NSW Premier and Colonial Treasurer, on 18 November 1933.

The Enfield War Memorial is situated on the corner of Liverpool Road and Coronation Parade on the lawn outside the former Enfield Council Chambers. The memorial is a rectangular sandstone pedestal with four marble plaque panels with the engraved names of the men and women who served during World War I. The top of the pedestal displays a 105mm French Howitzer gun that was donated to the Australian Government by the French government as recognition of Australia's wartime assistance during World War I. The Memorial was unveiled on 11 October 1924 by the NSW Attorney-General and later by the Premier of NSW from 1927-1930. Erection of the memorial was made possible by Mayor and Mayoress of Enfield, Mr and Mrs Ebenezer Ford. The wheel treads of the French howitzer gun which are made of wood are still intact. 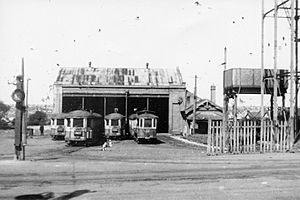 The Enfield system began as a steam tramway opening in 1891 between Ashfield Station and Enfield and was a separate group of lines that worked independently from the main Sydney network. The lines were based around a depot in Enfield. The green patch of grass that covers most of Coronation Parade lies on top of the original tram tracks that led, in a straight line, directly north onto the Boulevarde along a route that led originally from Ashfield. In 1901, this line was extended north to Mortlake, and in 1909 a branch to Cabarita Park was opened. The system was electrified in 1912. 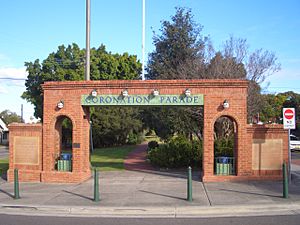 Services operated from Ashfield Station along Liverpool Road, Georges River Road and Tangarra Street, then north along Coronation Parade in a straight line passing what is now the Enfield War Memorial and back to Liverpool Road through Enfield, and then north along Burwood Road through Burwood. The line then turned into Crane Street, then Majors Bay Road and Brewer Street to Cabarita Junction.

The line was double track until this point, it then split into single-track branches to Mortlake and Cabarita. Short services were turned back at Brighton Avenue, Plymouth Street, Enfield, Burwood Station and Wellbank St.

Services operated every five minutes between Ashfield and Wellbank St in peak periods, and every 15 minutes (30 minutes at off-peak times) on the two branches. A depot on Tangarra Street served the lines. The lines closed in 1948, and were replaced by buses. 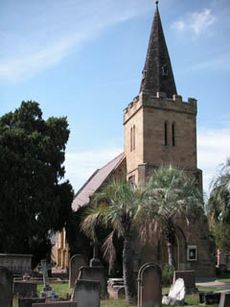 St Thomas's Anglican Church, Coronation Parade was built in 1848 in a Gothic Revival style and is now listed on the Register of the National Estate;

Liverpool Road intersects with Coronation Parade and The Boulevarde at Enfield.

Prior to the 1960s, there was a tramline which ran from Ashfield to Mortlake and Cabarita via Enfield and Burwood following the route of the modern day 462, 464 & 466 bus services. 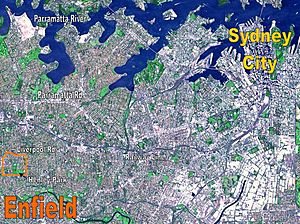 NASA image of Sydney's CBD and inner west suburbs, with borders of Enfield shown in orange

According to the 2011 census, Enfield had a population of 2,697. Like many neighbouring suburbs, it had a high migrant population with more than half the population speaking a language other than English at home. The most common languages were Mandarin 7.3%, Korean 6.6%, Italian 6.6%, Arabic 6.0% and Cantonese 5.8%.. There were 1,311 people in the labour force with the most common industries being Cafes, Restaurants and Takeaway Food Services (4.8%), Depository Financial Intermediation 3.9%, and Legal and Accounting Services 3.6% The most common responses for religion in the 2011 Census were Catholic 42.1%, No Religion 14.5%, Eastern Orthodox 8.3%, Anglican 7.3% and Buddhism 5.0%.

All content from Kiddle encyclopedia articles (including the article images and facts) can be freely used under Attribution-ShareAlike license, unless stated otherwise. Cite this article:
Enfield, New South Wales Facts for Kids. Kiddle Encyclopedia.