Strathfield is a suburb in the Inner West of Sydney, in the state of New South Wales, Australia. It is located 12 kilometres west of the Sydney central business district and is the administrative centre of the Municipality of Strathfield. A small section of the suburb north of the railway line lies within the City of Canada Bay, while the area east of The Boulevard lies within the Municipality of Burwood. North Strathfield and Strathfield South are separate suburbs to the north and south, respectively.

The Strathfield district was originally occupied by the Wangal Indigenous Australians tribe. European settlement commenced in 1793 with the issue of land grants. In 1808, a grant was made to James Wilshire, which forms the largest part of the current suburb of Strathfield. In 1867, this grant was subdivided and sold as the 'Redmire Estate', which promoted the residential development of the district under the suburb name of 'Redmire'. By 1885, sufficient numbers of people resided in the district to enable incorporation of its own local government. The suburb of Redmire was renamed Strathfield c.1886. The suburb was named after a house called 'Strathfield House', which was originally called Stratfield Saye. In 1885, Strathfield Council was incorporated. 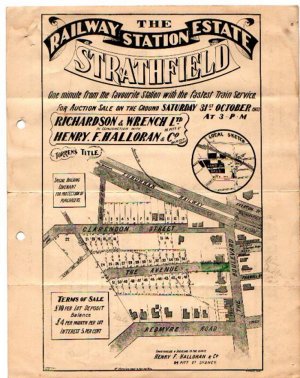 On 31 October 1903 a subdivision of the Redmyre Estate was auctioned. The pamphlet shows it was billed as "The Railway Station Estate, Strathfield".

James Wilshire was granted 243 acres (1 km²) of land by Governor Macquarie in 1808 [regranted 1810] following representations from Lord Nelson, a relation by marriage of Wilshire. Ownership was transferred in 1824 to ex-convict Samuel Terry. The land became known as the Redmire Estate, which Michael Jones says could either be named after his home town in Yorkshire or could be named after the "red clay of the Strathfield area". Subdivision of the land commenced in 1867. An early buyer was one-time Mayor of Sydney, Walter Renny who built in 1868 a house they called Stratfieldsaye, possibly after the Duke of Wellington's mansion near Reading, Berkshire. It may have also been named after the transport ship of the same name that transported many immigrants – including Sir Henry Parkes – to Australia, though the transport ship was probably also named after the Duke's mansion as it was built soon after his death and was likely named in his honour. A plaque marking the location of Stratfield Saye can be found in the footpath of Strathfield Avenue, marking the approximate location of the original house [though some of the wording on the plaque is incorrect]. According to local historian Cathy Jones, "ownership of [Stratfieldsaye] was transferred several times including to Davidson Nichol, who shortened the name to 'Strathfield House', then 'Strathfield'." 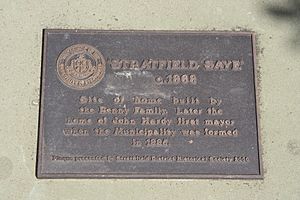 Strathfield was proclaimed on 2 June 1885 by the Governor of NSW, Sir Augustus Loftus, after residents of the Redmyre area petitioned the New South Wales State government. Residents in parts of Homebush and Druitt Town [now Strathfield South] formed their own unsuccessful counter-petition. It is likely that the region was named Strathfield to neutralise the rivalry between Homebush and Redmire. 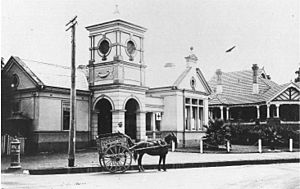 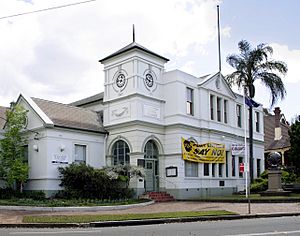 Strathfield Council was incorporated in 1885 and included the suburbs of Redmire, Homebush and Druitt Town. The adjoining area of Flemington was unincorporated and was annexed to Strathfield Council in 1892, which increased the size of the Council area by about 50%. The Council formed three wards - Flemington,Homebush and Strathfield - and Aldermen was elected to represent their ward at Council. Wards were abolished in 1916. Following the introduction of the Local Government Act in 1919, Strathfield Council was one of the first to proclaim the major part of its area a residential district by proclamation in 1920. 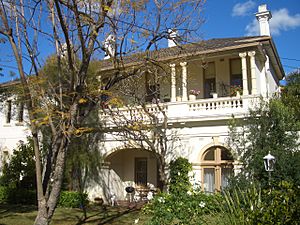 Strathfield's residential landscape is extremely varied, ranging from country-style estates to high-rise apartments. Many styles of architecture have been employed over past decades, with dwellings having been constructed in Victorian, Federation, Interwar period architecture, Californian Bungalow and contemporary periods. One of the oldest surviving houses built in the 1870s is Fairholm which is now a retirement village called Strathfield Gardens.

Primarily these have been replaced by modern, multimillion-dollar mansions, although Strathfield has retained its wide avenues and most of the extensive natural vegetation. Streets such as Victoria Street, Llandillo Avenue and Kingsland Road predominantly feature older mansions, while Agnes Street, Newton Road and Barker Road are common locations for new homes.

The "Golden Mile" in Strathfield refers to a pocket within the suburb that houses some of the most desirable and highly sought-after real estate in the area. The Golden Mile is bounded by Hunter Street, Carrington Avenue, Homebush Road and The Boulevarde. Examples of prestigious addresses include homes located on Cotswold Road, Strathfield Avenue, Llandilo Avenue, Agnes and Highgate Street.

Additionally, decreasing land sizes through subdivision has led to an increase in residential densities, reflecting the outward expansion of Sydney's inner city. A large proportion of Strathfield's population now dwells in apartments with the area immediately surrounding Strathfield railway station dominated by high rise residential towers. Smaller apartment buildings are located in other areas within the suburbs, were mostly built during the 1960s and 1970s. In the last century a number of grand Strathfield homes have become private schools:

Strathfield has made an impact on the indie rock and indie pop scene, producing bands such as Prince Vlad & the Gargoyle Impalers, Lunatic Fringe, The Mexican Spitfires and Women of Troy. It has also inspired pop songs such as The Mexican Spitfires's song "Rookwood" about Rookwood Cemetery and the legendary Blitzkrieg punk rock of Radio Birdman's classic mid-1970s "Murder City Nights". Indie pop legend Grant McLennan of The Go-Betweens also called Carrington Avenue, Strathfield home for a few years in the 1990s.

Strathfield is known as a regional centre for education. Strathfield's commercial town centre is centred on a town square south of the station, and includes the Strathfield Plaza shopping centre which includes Woolworths and other stores, as well as a large number of cafes, restaurants and other stores located around the square and along Albert Road, Churchill Avenue, Redmyre Road and the Boulevarde. Strathfield's town centre is particularly known for a large concentration of Korean restaurants and shops catering to Korean cultural needs. The area is often called Little Korea.

Strathfield railway station is a major interchange on the Sydney Trains and NSW TrainLink networks, and has long been an interchange for several of Sydney's suburban lines, as well as intercity services and interstate services. However, intercity services from Strathfield significantly reduced in 2013. With the upgrading of the East Hills line, intercity trains heading southwest to Canberra and Melbourne from Sydney Central began to use that line, leaving only intercity trains to the north and west to continue using Strathfield station. The bus station located on the town square, immediately south of the station, is an interchange for buses serving the Inner West.

All content from Kiddle encyclopedia articles (including the article images and facts) can be freely used under Attribution-ShareAlike license, unless stated otherwise. Cite this article:
Strathfield, New South Wales Facts for Kids. Kiddle Encyclopedia.