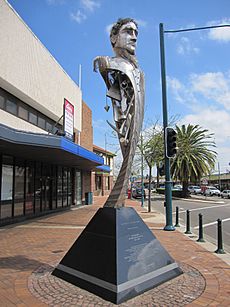 Liverpool is a suburb of Greater Western Sydney, in the state of New South Wales, Australia. It is located 27 kilometres (17 mi) south-west of the Sydney CBD. Liverpool is the administrative seat of the local government area of the City of Liverpool and is situated in the Cumberland Plain.

Liverpool is one of the oldest urban settlements in Australia, founded on 7 November 1810 as an agricultural centre by Governor Lachlan Macquarie. He named it after Robert Banks Jenkinson, Earl of Liverpool, who was then the Secretary of State for the Colonies and the British city of Liverpool, upon which some of the area's architecture is based.

Liverpool is at the head of navigation of the Georges River and combined with the Great Southern Railway from Sydney to Melbourne reaching Liverpool in the late 1850s, Liverpool became a major agricultural and transportation centre as the land in the district was very productive.

Until the 1950s, Liverpool was still a satellite town with an agricultural economy based on poultry farming and market gardening. However the tidal surge of urban sprawl which engulfed the rich flatlands west of Sydney known as the Cumberland Plain soon reached Liverpool, and it became an outer suburb of metropolitan Sydney with a strong working-class presence and manufacturing facilities. The Liverpool area also became renowned for its vast Housing Commission estates housing thousands of low-income families after the slum clearance and urban renewal programs in inner-city Sydney in the 1960s.

The following buildings are listed on the Register of the National Estate or the State Heritage Register:

Liverpool is well served by roads such as the Hume Highway (also known as Liverpool Road), the M5 motorway, the Westlink M7 motorway.

Schools and places of worship

There are three public primary schools within the suburb of Liverpool: Liverpool Public School, Liverpool West and Marsden Road. Liverpool Boys and Liverpool Girls are the two public secondary schools. The Mainsbridge School caters to children with intellectual disabilities and Liverpool Hospital School for children hospitalised for lengthy periods.

Post secondary education is catered to with the South Western College of TAFE, Macarthur Community College, Liverpool U3A: School for Seniors, University of Western Sydney English Language Centre and the School of Arts in Macquarie Street.

St Lukes Anglican Church, located in the city centre across the road from Westfield Liverpool, is the oldest Anglican church in Australia. All Saints Catholic Church in George St is located with the All Saints schools. St Raphael, Nickolas and Irene Greek Orthodox Church is in Forbes Street and the Serbian Orthodox Church of the Apostle Luke is on Flowerdale Rd. 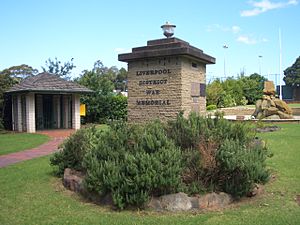 There are many open spaces within the city centre, including botanical parks and sporting facilities. Bigge Park on the east side of the city features a War Memorial while Pioneer Memorial Park to the north has a historical cemetery. Woodward Park to the west is the main sporting precinct containing a number of outdoor playing fields and the Whitlam Leisure Centre, hosting a swimming pool and a 3000-seat indoor sports stadium. Other notable sports facilities within the suburb of Liverpool include Collimore Park (netball) and Paciullo Park (soccer and touch football).

Prominent local teams include Fairfield-Liverpool Cricket Club which plays in the Sydney Grade Cricket competition, Liverpool City Netball, which has participated successfully in many State and representative competitions, Hinchinbrook Hornets Junior Rugby League and FC Bossy Liverpool which plays in the New South Wales Super League and Liverpool Rangers FC which is located at Ireland Park,Memorial Avenue.The West Sydney Razorbacks basketball team used to play out of the Gough Whitlam Centre while they were in the NBL. Liverpool is also home to Australian Ice Hockey League team the Sydney Ice Dogs who play out of the Liverpool Catholic Club Ice Rink and Liverpool little athletics. 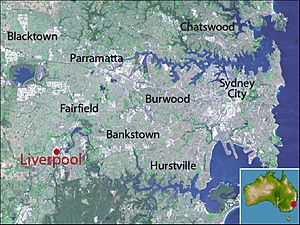 Location map of Liverpool based on NASA satellite images

According to the 2011 census conducted by the Australian Bureau of Statistics, Liverpool had a population of 180,143. These came from a wide variety of ethnic backgrounds; less than one-third (32.4%) of residents were born in Australia, which is less than half of the national average of 69.8%. The next most common countries of birth were Iraq (9.5%), India (5.9%), Croatia (4.0%), Fiji (3.2%) and Bosnia and Herzegovina (3.2%). This should be considered together with residents' self-reported ancestry in the same census to show another aspect of their cultural identity: only 8.4% identified this as Australian; the most popular responses were Australian 8.4%, Indian 8.0%, English 7.5% and Iraqi 5.9%.

Liverpool is remarkable for the high proportion of people who reported following some religion in the Census; only 6.1% stated that they had no religion, much lower than the national average of 22.3%. However, it should also be noted that this Census question is optional and 11.6% of residents did not respond to it, which introduces some uncertainty into all the religious figures. The most common responses for religion were Catholic 20.5%, Islam 13.3%, Eastern Orthodox 13.0%, Hinduism 7.5% and "Miscellaneous Religions" 7.1%.

Liverpool has a humid subtropical climate (Köppen climate classification: Cfa) and is a few degrees warmer than the Sydney CBD, although nights are slightly cooler than Sydney's. If the maximum temperature is 27 °C in the City, in Liverpool it could typically reach as high as 33 °C, while in winter the temperature can be close to 0 °C while it is above 5 °C in central Sydney. Rainfall is almost evenly spread throughout the year, although the first half tends to be wetter, namely in March. July and September tend to be drier.

All content from Kiddle encyclopedia articles (including the article images and facts) can be freely used under Attribution-ShareAlike license, unless stated otherwise. Cite this article:
Liverpool, New South Wales Facts for Kids. Kiddle Encyclopedia.