Parramatta is a suburb of Sydney, Australia, 23 kilometres (14 mi) west of its central business district on the banks of the Parramatta River. Parramatta is the administrative seat of the City of Parramatta, one of four cities within the Sydney metropolitan area.

Parramatta, founded by the British in 1788, the same year as Sydney, is the oldest inland European settlement in Australia and the economic capital of Greater Western Sydney. Since 2000, government agencies such as the New South Wales Police Force and Sydney Water have relocated to Parramatta from the centre of Sydney.

Parramatta is a major business and commercial centre, and home to Westfield Parramatta, the ninth largest shopping centre in Australia.

Major upgrades have occurred around Parramatta railway station with the expansion of Westfield Parramatta, the creation of a new transport interchange, and the ongoing development of the Parramatta Square local government precinct. It is colloquially known as Parra.

Radiocarbon dating suggests human activity occurred in Parramatta from around 30,000 years ago.

The Darug people who lived in the area before European settlement regarded the area as rich in food from the river and forests. They called the area Baramada or Burramatta ('Parramatta') which means "head of waters", "the place where the eels lie down", or "eel waters" To this day many eels and other sea creatures are attracted to nutrients that are concentrated where the saltwater of Port Jackson meets the freshwater of the Parramatta River. The Parramatta Eels Rugby League club chose their symbol as a result of this phenomenon. 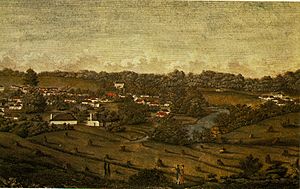 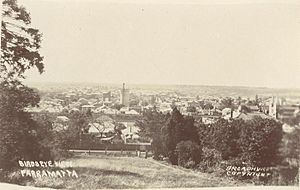 Parramatta in the early 20th century

Parramatta was founded in 1788, the same year as Sydney. As such, Parramatta is the second oldest city in Australia, being only 10 months younger than Sydney. The British Colonists, who had arrived in January 1788 on the First Fleet at Sydney Cove, had only enough food to support themselves for a short time and the soil around Sydney Cove proved too poor to grow the amount of food that 1,000 convicts, soldiers and administrators needed to survive. During 1788, Governor Arthur Phillip had reconnoitred several places before choosing Parramatta as the most likely place for a successful large farm. Parramatta was the furthest navigable point inland on the Parramatta River (i.e. furthest from the thin, sandy coastal soil) and also the point at which the river became freshwater and therefore useful for farming.

On Sunday 2 November 1788, Governor Phillip took a detachment of marines along with a surveyor and, in boats, made his way upriver to a location that he called The Crescent, a defensible hill curved round a river bend, now in Parramatta Park. As a settlement developed, Governor Phillip gave it the name "Rose Hill" after George Rose, Secretary for the British Treasury. In 1791 he changed the name to Parramatta, approximating the term used by the local Aboriginal people. A neighbouring suburb acquired the name Rose Hill.

In an attempt to deal with the food crisis, Phillip in 1789 granted a convict named James Ruse the land of Experiment Farm at Parramatta on the condition that he develop a viable agriculture. There, Ruse became the first person to successfully grow grain in Australia. The Parramatta area was also the site of the pioneering of the Australian wool industry by John Macarthur's Elizabeth Farm in the 1790s. Philip Gidley King's account of his visit to Parramatta on 9 April 1790 is one of the earliest descriptions of the area. Walking four miles with Governor Phillip to Prospect he saw undulating grassland interspersed with magnificent trees and a great amount of kangaroos and emus.

Governor Arthur Phillip built a small house for himself on the hill of The Crescent. In 1799 this was replaced by a larger residence which, substantially improved by Governor Lachlan Macquarie from 1815 to 1818, has survived to the present day, making it the oldest surviving Government House anywhere in Australia. It was used as a retreat by Governors until the 1850s, with one Governor (Governor Brisbane) making it his principal home for a short period in the 1820s. The house, Old Government House, is currently a historic site and museum within Parramatta Park and is Australia's oldest surviving public building.

In 1814 Macquarie opened a school for Aboriginal children at Parramatta as part of a policy of improving relations between Aboriginal and European communities. This school was later relocated to "Black Town". 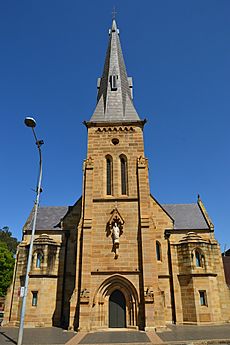 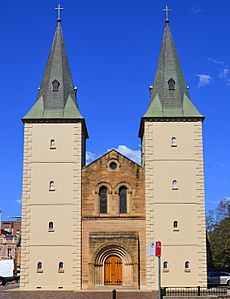 Church Street takes its name from St John's Cathedral (Anglican), which was built in 1803 and is the oldest church in Parramatta. While the present building is not the first on the site, the towers were built during the time of Governor Macquarie, and were based on those of the church at Reculver, England, at the suggestion of his wife, Elizabeth. The historic St John's Cemetery is located nearby on O'Connell Street.

St Patrick's Cathedral (Roman Catholic) is one of the oldest Catholic churches in Australia. Construction commenced in 1836, but it wasn't officially complete until 1837. In 1854 a new church was commissioned, although the tower was not completed until 1880, with the spire following in 1883. It was built on the site to meet the needs of a growing congregation. It was destroyed by fire in 1996, with only the stone walls remaining.

On 29 November 2003, the new St Patrick's Cathedral was dedicated. The historic St Patricks Cemetery is located in North Parramatta. The Uniting Church is represented by Leigh Memorial Church. Parramatta Salvation Army is one of the oldest active Salvation Army Corps in Australia. Parramatta is also home to the Parramatta and Districts Synagogue, which services the Jewish community of western Sydney.

The Greek Orthodox Parish and Community of St Ioannis (St John The Frontrunner) Greek Orthodox Church was established in Parramatta in May 1960 under the ecumenical jurisdiction of the Greek Orthodox Archdiocese of Australia to serve the predominantly emigrating Greek population of Greater Western Sydney. Originally, the liturgies where held in the hall of St John's Ambulance Brigade in Harris Park until the completion of the church in December 1965 located in Hassall Street Parramatta. The Parish Community of St Ioannis continues to serve over 5,000 Greek parishioners.

A Buddhist temple is located in Cowper Street, Parramatta. Parramatta's Mosque is in an apartment building on Marsden Street, Parrmatta. The district is served by Hindu temples located on Eleanor St, Rosehill, and a Murugan temple in Mays Hill, off Great Western Highway. 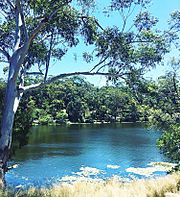 Lake Parramatta, a recreational area near the suburb. 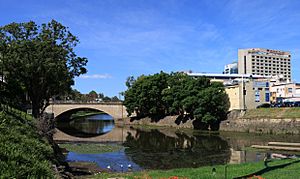 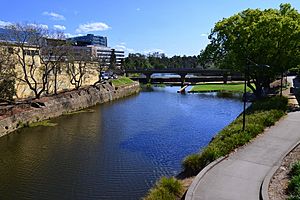 Lake Parramatta, situated in the northern edges of the suburb, is a recreational area and a nature reserve which features walking tracks, a restaurant and a swimming hole within the scenic bushland.

Furthermore, there are a number of small parks and reserves on the edges of Parramatta River, which feature seats, walking tracks and playgrounds.

Parramatta has a humid subtropical climate (Köppen climate classification: Cfa) with mild to cool winters and warm, sometimes hot summers, and rainfall spread throughout the year.

Depending on the wind direction, summer weather may be humid or dry, though the humidity is mostly in the comfortable range, with the late summer/autumn period having a higher average humidity than late winter/early spring. Summer maximum temperatures are quite variable, often reaching above 35 °C (95 °F), on average 8.1 days in summer, and sometimes remaining in the low 20's, especially after a cold front or a sea breeze, such as the southerly buster.

Northwesterlies can occasionally bring hot winds from the desert that can raise temperatures higher than 40 °C (104 °F) mostly from November to February. Parramatta is slightly warmer than Sydney CBD in the summer due to the urban heat island effect and its inland location. In extreme cases though, it can be 5 – 10 °C (9 – 18 °F) warmer than Sydney, especially when sea breezes do not penetrate inland on hot summer and spring days. For example, on the 28th November 2009, the city reached 29.3 °C (84.7 °F), while Parramatta reached 39.0 °C (102.2 °F), almost 10 °C higher.

Rainfall is fairly evenly divided between summer and winter, but is slightly higher during the first three months of the year, when easterly winds dominate. The second half of the year tends to be drier (late winter/spring), that is when westerly winds dominate, which bring drier conditions. Thunderstorms are common in the months from early spring to early autumn, occasionally quite severe thunderstorms can occur. Snow in virtually unknown, having been recorded only in 1836 and 1896 Parrammatta gets 106.6 days of clear skies annually.

Parramatta is the major transport hub for Western Sydney, servicing trains and buses, as well as having a ferry wharf and a future light rail service.

At the 2011 census, 38.4% of Parramatta's workers travelled to work on public transport and 40.6% by car (either as driver or as passenger). 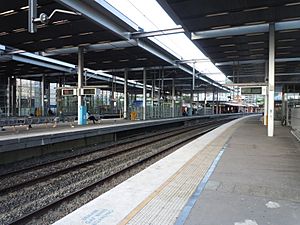 Parramatta railway station is a major transport interchange on the Sydney rail network. It is served by Sydney Trains' Cumberland Line and North Shore, Northern & Western Line. NSW TrainLink operate intercity services on the Blue Mountains Line as well as services to rural New South Wales. The station was originally opened in 1855, located in what is now Granville, and known as Parramatta Junction. The station was moved to its current location and opened on 4 July 1860, five years after the first railway line in Sydney was opened, running from Sydney to Parramatta Junction.

The current station was upgraded, with work beginning in late 2003 and the new interchange opening on 19 February 2006. The original station still exists within the over-all structure as part of Platform 4.

The routes passing through Parramatta are provided by many operators including Hillsbus, Sydney Buses, Transit Systems Sydney and Transdev NSW. 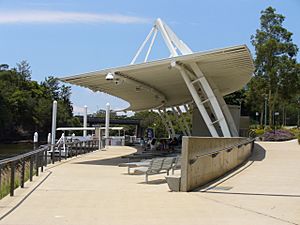 The Parramatta ferry wharf is at the Charles Street Weir, which divides the tidal saltwater from the freshwater of the upper river, on the eastern boundary of the Central Business District. The wharf is the westernmost destination of the Sydney Ferries River Cat ferry service which runs on Parramatta River.

The two-line Parramatta Light Rail project was announced in 2015. Lines originating from Carlingford and Strathfield will form a combined route at Camellia and pass through Parramatta before terminating at Westmead.

James Ruse Drive serves as a partial ring-road circling around the eastern part of Parramatta to join with the Cumberland Highway to the north west of the city.

The main north-south route through Parramatta is Church Street. To the north it becomes Windsor Road, and to the south it becomes Woodville Road. 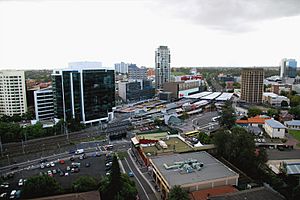 View of the transport interchange and surrounds in 2007

According to the 2011 census conducted by the Australian Bureau of Statistics, the suburb of Parramatta had a population of 19,745. Of these:

As the centre of the City of Parramatta, as well as the centre and second largest business district of Sydney, Parramatta hosts many festivals and events. Riverside Theatre is a performing arts centre located on the northern bank of Parramatta River. The city hosts the following events:

Parramatta Park contains Old Government House and thus Parramatta was once the capital of the colony of New South Wales until Governors returned to residing in Sydney in 1846. Another feature is the natural amphitheatre located on one of the bends of the river, named by Governor Philip as "the Crescent", which is used to stage concerts. It is home to the Dairy Cottage, built from 1798 to 1805, originally a single-room cottage and is one of the earliest surviving cottages in Australia.

The remains of Governor Brisbane's private astronomical observatory, constructed in 1822, are visible. Astronomers who worked at the observatory, discovering thousands of new stars and deep sky objects, include James Dunlop and Carl Rümker. In 1822, the architect S. L. Harris designed the Bath House for Governor Brisbane and built it in 1823. Water was pumped to the building through lead pipes from the river. In 1886, it was converted into a pavilion. 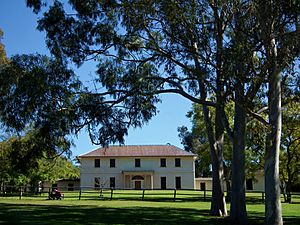 Being one of the older regions of Sydney and an area of greater cultural heritage, Parramatta has a number of heritage-listed buildings on the Register of the National Estate, including: 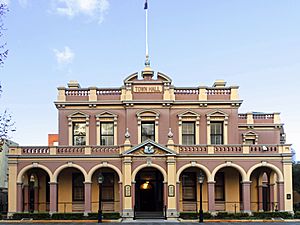 All content from Kiddle encyclopedia articles (including the article images and facts) can be freely used under Attribution-ShareAlike license, unless stated otherwise. Cite this article:
Parramatta Facts for Kids. Kiddle Encyclopedia.