Rosehill is a suburb of Sydney, in the state of New South Wales, Australia. Rosehill is located 18 kilometres west of the Sydney central business district in the local government area of the City of Parramatta and is part of the Greater Western Sydney region.

Rosehill shares the postcode of 2142 with the separate suburbs of Granville, South Granville, Holroyd and Camellia.

Rosehill contains a mixture of residential, commercial, industrial and recreational land. However, the redevelopment of this land is imminent. 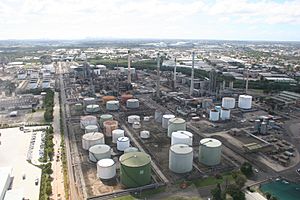 In the early days of the colony, the hill behind old Government House had been named ‘Rose Hill’ by Governor Arthur Phillip, before the suburb had been named Parramatta. Nearly a hundred years later in 1883, 850 acres (3.4 km2) of John Macarthur’s Elizabeth Farm were subdivided for industrial purposes. Part of the estate was set aside for a recreation area, which became Rosehill Racecourse.

A public school opened here in 1886 and the railway station opened in 1888 on the Carlingford line, which was a private railway line until it was taken over by the state government in 1904.

All content from Kiddle encyclopedia articles (including the article images and facts) can be freely used under Attribution-ShareAlike license, unless stated otherwise. Cite this article:
Rosehill, New South Wales Facts for Kids. Kiddle Encyclopedia.