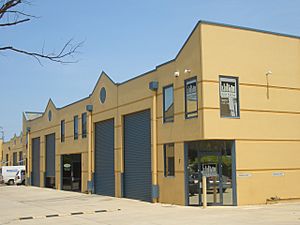 Clyde is a suburb of Sydney, in the state of New South Wales, Australia. Clyde is located 21 kilometres west of the Sydney central business district in the local government area of the City of Parramatta. Clyde is part of the Greater Western Sydney region.

Clyde is named for the River Clyde in Scotland and was thought to be a suitable name because a subdivision of land made in 1878 here was called New Glasgow.

Rosehill Junction was the name of the railway station that opened here in 1882, just west of the bridge over the Duck River . It was a junction for the Western railway line with the Carlingford railway line and Sandown railway line. The Commissioner of Railways Edward Miller Grant Eddy renamed the station Clyde Junction, before settling upon the name Clyde in 1883 saying: New Glasgow is close by and as old Glasgow is watered by the Clyde, to which Duck River has been likened, perhaps Clyde would not be unacceptable. The station became Clyde Junction in 1901 but reverted to Clyde in April 1904.

Clyde railway station is a junction for the North Shore, Northern & Western Line and Carlingford railway line of the Sydney Trains network.

All content from Kiddle encyclopedia articles (including the article images and facts) can be freely used under Attribution-ShareAlike license, unless stated otherwise. Cite this article:
Clyde, New South Wales Facts for Kids. Kiddle Encyclopedia.