Auburn is a Western Sydney suburb in the state of New South Wales, Australia. Auburn is located 16 kilometres (9.9 mi) west of the Sydney central business district and is in the local government area of Cumberland City Council, having previously been the administrative centre of Auburn Council. The suburb was named after Oliver Goldsmith's poem The Deserted Village, which describes 'Auburn' in England as the "loveliest village of the plain".

Auburn prides itself as one of the most multicultural communities in Australia, being home to a high percentage of immigrants from Afghan, Turkish, Lebanese, and Chinese backgrounds.

The suburb was named after Oliver Goldsmith's poem The Deserted Village, which describes 'Auburn' in England as the loveliest village of the plain.

The Auburn area was once used by Aboriginal people as a market place for the exchange of goods, a site for ritual battles and a 'Law Place' for ceremonies. The area was located on the border between the Darug inland group and the Eora/Dharawal coastal group. The Wangal and Wategoro, sub-groups or clans, are the groups most often recognised as the original inhabitants of the Auburn/Homebush Bay region.

Bennelong, one of the most famous Aboriginals of the time, was a member of Wangal, as was his wife, Barangaroo. Pemulwuy, who organised tribes to resist the white settlement of the Sydney region from 1790 to 1802 was also a member of the Wangal.

On 5 February 1788, soon after the landing of Captain Phillip at Sydney Cove, Captain John Hunter and Lieutenant William Bradley sailed up what is now known as the Parramatta River, as far as Homebush Bay. Captain Hunter was the first white person to set foot within the Auburn Local Government Area.

Ten days later, the Governor, along with a well-armed party in three boats, reached Homebush Bay. They ventured about 3 kilometres inland. The following day a party of explorers traced the river in a westerly direction, coming to the place where the Duck River enters the Parramatta River. They explored the tributary as far as the depth of water permitted.

Seeing what appeared to be ducks rising out of a swamp covered with reeds, they named the river Duck River. The ducks were actually Eastern Swamp Hens, but the name Duck River remained. The Eastern Swamp Hen featured prominently on the Council's Coat of Arms and was part of the former Auburn City Council logo.

In February 1793 Auburn area was established as the first free-agricultural settlement thanks to Governor Phillip’s repeated applications to the British government for free settlers. Phillip was of the opinion that only free settlers with the assistance of convicts will be able to create an environment in which a country could support its inhabitants. Secretary Dundas endorsed Governor’s opinion and secured an agreement with several farmers, some of them were members of Religious Society of Friends – Quakers, to settle in the colony. The first grants were given to Thomas Rose, Frederic Meredith, Thomas and Joseph Webb as well as Edward Powell. The deeds of the land described the farms’ location as Liberty Plains and this is the name given to the neighbourhood of their farms by the first settles, although the actual area bearing that name was a little further, lying at the upper part of Port Jackson. Dwellers of the Liberty Plains Parish were very proud of the fact that in the colony of felons they were the first people who came to Australia as free men and were given a privilege of choosing their own grants. When in 1876 Auburn adopted its name, inspired by Oliver Goldsmith's poem The Deserted Village, describing the English village of Auburn as "the loveliest village of the plain", the people of Auburn still wanted to emphasise the fact that they were free settles. Hence, the first Auburn coat of arms depicted this in its motto: "Liberty, with steady zeal".

One of the early settlers in the area was Fred Chisholm, who had an estate west of the present site of Auburn railway station. In the 1880s, John Buchanan, a timber merchant, purchased land from Fred Chisholm and built his home, Duncraggarn Hall, a two-storey Italianate mansion with a central tower and elaborate wrought-iron balconies. In 1892, Buchanan sold his thirteen-acre estate to the Sisters of Charity, who turned the house into St Joseph's Hospital for Consumptives. In 1903, extensions to the hospital were constructed and the house itself became a convent for the sisters. Further modifications and extensions took place over the years, with the eventual result that the old hospital site became St Joseph's Village—a retirement village—with a modern hospital next door. Duncraggarn Hall is heritage-listed.

The Auburn Local Government Area as we know it today was formed in 1948, when Auburn and Lidcombe Councils merged into Auburn Municipal Council. The boundaries of this municipality were much as they are today.

Auburn railway station is on the Western and Inner West & Leppington lines of the Sydney Trains network, where there are frequent services.

The Auburn Maintenance Centre, a large maintenance and storage facility which services Sydney Trains rolling stock, is located to the northwest of the town centre, close to Clyde station.

Auburn also has a number of bus services, which service Auburn and the surrounding areas.

Busways operate two routes to and from Auburn station: 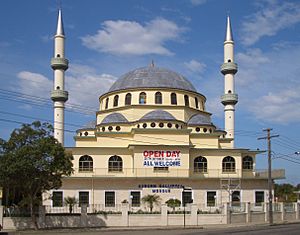 The Sri Mandir in Auburn is Australia's oldest Hindu temple, having opened in 1977.

The Auburn Gallipoli Mosque took thirteen years to construct and was largely funded by the Turkish community in the area. The name of the mosque reflects the legacy of Gallipoli in Turkey and the shared bond between Australian society and the Australian Turkish Muslim Community who constructed the mosque.

Foundation and planning for the mosque to be built started with Bahattin Ozdemir (President of the Mosque at that time). He brought over plans from Turkey made by Architect Omer Kirazoglu designed it in the Classical Ottoman Style of Architecture characterised by a central dome and minarets. The builder was Ahmet Asim who donated much of his time. It is a source of pride for the local community and whilst considered a Turkish mosque it is frequented by all sections of the Islamic community and is one of Sydney's busiest mosques.

All content from Kiddle encyclopedia articles (including the article images and facts) can be freely used under Attribution-ShareAlike license, unless stated otherwise. Cite this article:
Auburn, New South Wales Facts for Kids. Kiddle Encyclopedia.