Berala is a conjunctional western suburb of Sydney, which connects the inner west, south west and west parts of Sydney in the state of New South Wales, Australia, located 16 kilometres west of the central business district, in the local government area of Cumberland Council.

Berala is derived from Bareela, an Aboriginal word for a musk duck. The area was originally swampy and attracted wild birds. When the railway line was being extended from Lidcombe to Regents Park, the names Torrington, Sidmouth and Bareela were considered. The station opened in 1912, the public school in 1924 and the post office in 1927.

Berala railway station is on the Bankstown Line of the Sydney Trains network. Bus services run between Auburn and Bankstown. 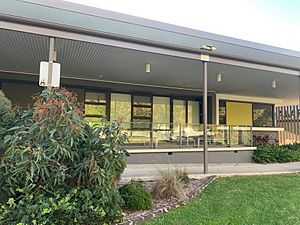 The Berala Community Centre is currently of use for recreation activities.

All content from Kiddle encyclopedia articles (including the article images and facts) can be freely used under Attribution-ShareAlike license, unless stated otherwise. Cite this article:
Berala, New South Wales Facts for Kids. Kiddle Encyclopedia.