Bankstown is a suburb of south-western Sydney, in the state of New South Wales, Australia. It is 20 kilometres west of the Sydney central business district and is located in the local government area of Canterbury-Bankstown Council, having previously been the administrive centre of the City of Bankstown prior to 2016.

Prior to European settlement, Cumberland Plains Woodland occupied much of the area. Turpentine ironbark forest covered much of what is now Bankstown. The land was occupied by the Bediagal people. Their land bordered the Dharawal and the Darung people. The Aboriginal inhabitants strongly opposed the European settlers. The resistance ceased after a number of their leaders were killed or imprisoned in 1816. In that year an epidemic broke out amongst the native people which reduced the Aboriginal populations, this also contributed to the end of their resistance. Bankstown is also culturally diverse

In 1795, Matthew Flinders and George Bass explored up the Georges River for about 20 miles beyond what had been previously surveyed, and reported favourably to Governor Hunter of the land on its banks. Hunter examined the country himself, and established one of the pioneer colonies there, called Bank's Town, today written as one word Bankstown.

Hunter named the area Bankstown after Sir Joseph Banks, who travelled to Australia with Captain James Cook in 1770. The area of first European settlement along the river has been partially preserved as part of the Mirambeena Regional Park.

The first town hall and Council Chambers were built in 1898 on the northern side of the Hume Highway (Liverpool Road), near Rookwood Road (site of the Three Swallows Hotel). The council chambers were relocated to a new building in South Terrace (now Old Town Centre Plaza) in June 1918. The building still stands and now has a shopping arcade running through it. 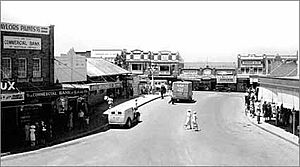 In 1939, local residents were made privy to the events of World War II. Conscripted residents were required to report for duty at a drill hall on Canterbury Road, Belmore. Camps were set up in and around Canterbury Racecourse and local parks in the district. Residents with foreign names were sent to internment camps as there was growing suspicion about residents with foreign names. A portion of these folk were Australian citizens who served with the Australian armed forces during World War I.

During World War II, Bankstown Airport was established as a key strategic air base to support the war effort. After the arrival of Douglas MacArthur in Australia, control of Bankstown Airport was handed to US Forces, becoming home to US 35th Fighter Squadron and the 41st Pursuit Squadron of the United States Air Force and the United States Army Air Forces who occupied the airport from 1942 to 1944. In 1945 operations became the responsibility of the British Fleet Air Arm, known as HMS Nabberley, until 1946, when it was handed back to the RAAF. 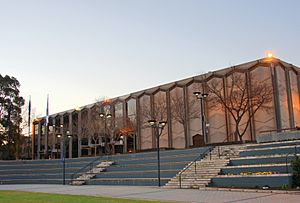 During this period an RAAF unit known as No. 1 Fighter Sector RAAF took control of the Capital Hall in Bankstown. This unit was formed in Bankstown, on 25 February 1942. Their living quarters were located next door and down the road from the hall & the staff were housed in galvanised iron barracks. Operations were handed over to the United States Army Air Corps on 10 April 1942 before they were transferred to a disused railway tunnel at St James railway station in Sydney. The unit was renamed, Air Defence Headquarters Sydney (ADHQ) on 21 January 1945 and moved into a three-storey semi-underground purpose built operations and plotting facility at Bankstown, known as the Bankstown Bunker.

World War II began Bankstown's industrial revolution. Few factories or industry of any consequence were located in Bankstown prior to 1945, this was changed dramatically between 1942 and 1954, especially when the Department of Aircraft Production gave approval for aircraft manufacturer Hawker De Havilland, to operate a factory at the airport for the production and manufacture of de Havilland Mosquito bombers. There are now over seven-thousand businesses operating within the Bankstown district.

Bankstown's population increased dramatically after World War II by people relocating from the inner-city areas and incoming migrants, mainly from Europe and towards the end of the 20th century from Asia, Middle East (especially Vietnamese and Lebanese ) and the rest of the world.

On 27 May 1980, during a visit by Her Majesty Queen Elizabeth II, Bankstown was accorded city status.

The Bankstown Bunker is a disused RAAF operations facility, located on the corner of Marion and Edgar Street, Bankstown. The specially constructed bunker became an important Royal Australian Air Force headquarters from 1945 until its closure in 1947.

The Bankstown Bunker is of similar design to the underground Ops rooms of wartime England, which directed Britain's air defence fighter plane attacks on the invading German Luftwaffe. Entrance to the bunker was obtained through a concrete passageway which was well screened by a grassy slope, a stairway led to a maze of corridors and hallways leading to various sections.

The Bankstown bunker is currently buried under a public park which lies at the end of Taylor Street. 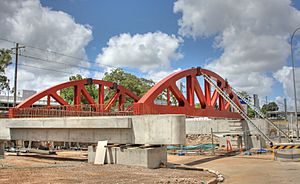 Bankstown railway station is on the Bankstown line of the Sydney Trains network. The rail line was built to Belmore in 1895 and then extended to Bankstown in 1909. The line was electrified in 1926. In 1928, the line was extended westwards from Bankstown to join the Main Suburban railway at Lidcombe and the Main South line to Liverpool. Bankstown is a major bus interchange for a number of bus services.

The Sydney Metropolitan Airport, more commonly known as Bankstown Airport, was established in 1940 and is constructed on 313 hectares. It has three runways, an extensive taxiway and includes a large business park containing over 170 businesses.

'Bankstown City Gardens' were opened to the public in 1973. These gardens consist of many unusual types of flora found in Bankstown and the surrounding area. The park consist of different areas, native, tropical, rose garden and Perennial.

'Paul Keating Park' was built on the site of Bankstown Council's former administration building, after it was destroyed by fire on 1 July 1997. 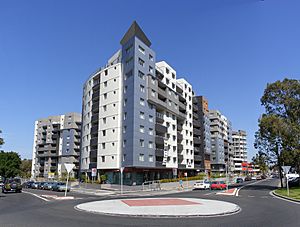 The median age of the Bankstown population was 31 years, 6 years below the national median of 37.

All content from Kiddle encyclopedia articles (including the article images and facts) can be freely used under Attribution-ShareAlike license, unless stated otherwise. Cite this article:
Bankstown Facts for Kids. Kiddle Encyclopedia.