Yagoona, a suburb of local government area Canterbury-Bankstown Council, is located 20 kilometres south-west of the Sydney central business district, in the state of New South Wales, Australia. It is a part of the South-western Sydney region. Yagoona is an Aboriginal word meaning 'now' or 'today'.

Yagoona was site of the first McDonald's restaurant to open in Australia in 1971.

Before European settlement, the area was originally occupied by the Bediagal people.

The area now known as Yagoona, Bass Hill, and north Bankstown was once known as Irish Town, due to the high concentration of Irish rebels transported here from Ireland in the late 1700s. Land grants were issued to Irish families and finally the suburb of Yagoona was created in 1927. St Matthew's Anglican Church was built on Liverpool Road (now Hume Highway) in 1861 to cater for the Protestants of the district as well as to function as a school.

Yagoona railway station is on the Bankstown line of the Sydney Trains network. A number of bus services link Yagoona to Bankstown and Parramatta. Yagoona is located some 5 - 10 minutes from Bankstown Central Business District and about 10 - 15 minutes from Parramatta CBD. 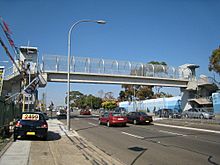 The Hume Highway cuts through Yagoona and is the main road access for Yagoona to Liverpool and Sydney City; and Rookwood Road connects south to Stacey Street/Fairford Road (Entrance to the M5), and north to Silverwater Road (Access to the M4). A 30-metre pedestrian bridge costing A$2.3 million linking the side footpaths of Hume Highway was built in 2006, primarily to ensure easy and safe access travel in this area for the students of Yagoona Primary School. Lifts are located at each end to ensure easy access for those with disabilities. The construction of the bridge was funded by the Government of New South Wales. The bridge will also help streamline Hume Highway traffic by removing the previous set of traffic lights.

Yagoona is a well established residential area with a population of approximately 15,000 according to the 2001 National Census, including an indigenous Australian population of 118. Of those born overseas in Yagoona, the largest group is from Vietnam, followed by Lebanon, Macedonia, China, UK, New Zealand, Italy, Greece, Philippines and Germany. As of 1996 to 2001, Yagoona has undergone a solid population increase despite numbers of Australian-born and the Indigenous decreasing.

Traditionally Yagoona has had a reputation of a retirement suburb, however this is slowly changing with younger residents calling the suburb home.

Each year an Autumn Fair was hosted in Yagoona's Gazzard Park, designed to allow the community to express their aims and objectives, as well as to raise funds for community projects and work. Its final year was around 2009. Events include a ticket raffle, Yagoona Scouts $1 sausage sizzle, free rides, a non-stop stage show, face painting and more. On at least one occasion, the fair was held in the Spring rather than Autumn.

Footy Legends, written by Khoa and Anh Do, directed by the former and starring the latter, is a drama movie set in Yagoona. It makes references to the social issues in the area and revolves around an amateur rugby league team consisting of socially disaffected people.

All content from Kiddle encyclopedia articles (including the article images and facts) can be freely used under Attribution-ShareAlike license, unless stated otherwise. Cite this article:
Yagoona, New South Wales Facts for Kids. Kiddle Encyclopedia.