Kids Encyclopedia Facts
This page is about the suburb of Sydney. For other uses, see Sefton. 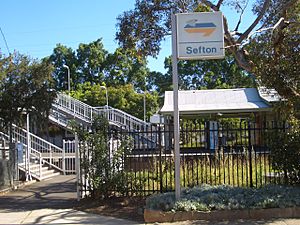 Sefton, a suburb of local government area Canterbury-Bankstown Council, is located 23 kilometres west of the Sydney central business district, in the state of New South Wales, Australia, and is a part of the Western Sydney region. Sefton shares the postcode of 2162 with the neighbouring suburb of Chester Hill.

The name Sefton was taken from Sefton in Merseyside, England. James Wood gave the name 'Sefton Park' to the 340 acres (1.4 km2) of land granted to him in 1839. Prior to subdivision, Sefton was an area of market gardens, orchards and poultry farms. It was the birthplace of property group Stockland in 1952.

Sefton railway station is on the Bankstown Line of the Sydney Trains network. There is a small shopping centre clustered around the railway station including Sefton Growers Market, Sefton Newsagency and a Thai/Australian bistro adjacent to the newsagency.

A number of sporting facilities are located around Sefton. This includes Jensen Oval and Sefton Golf Course. Sefton Golf Course is a council-owned 18-hole par-3 course on 15.6 hectares and is open all year round.

In the 2011 census, Sefton's population was recorded as 5,230, of whom 51.6% were born in Australia—typical of the Bankstown area and other south-western suburbs of Sydney. It is a culturally diverse community whose residents speak over 60 different languages. The most common countries of birth other than Australia include Vietnam (13.2%) and Lebanon (7.6%).

In 2008, it was a filming location for the international, award winning and critically acclaimed television drama series East West 101.

All content from Kiddle encyclopedia articles (including the article images and facts) can be freely used under Attribution-ShareAlike license, unless stated otherwise. Cite this article:
Sefton, New South Wales Facts for Kids. Kiddle Encyclopedia.