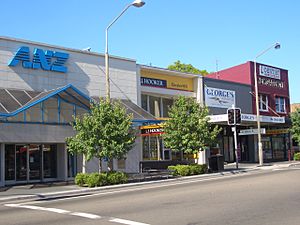 Chester Hill, a suburb of local government area Canterbury-Bankstown Council, is located 25 kilometres west of the Sydney central business district, in the state of New South Wales, Australia, and is part of the Greater Western Sydney region. Chester Hill shares the postcode of 2162 with the neighbouring suburb of Sefton.

The name for Chester Hill is an inversion of Hillchester which some have thought to be an English locality but such does not seem to exist. 'Chester' is one of the English forms of the Latin word 'castra' meaning a fortified camp. The name for the suburb was conferred by Mrs H. A. McMillan, who first wished to call the place Hillcrest, after an estate near Regent's Park, and then Hillchester but neither of these names met with official approval.

Originally part of John Thomas Campbell's estate, known as Campbell Hill, it covered 1,000 acres (4.0 km2). Land was used for market gardens and orchards until the opening of the railway line in 1924 when the area developed into residential and light industrial.

A significant tract of land between Priam and Hector Streets had been occupied by the Royal Australian Air Force (RAAF) from the 1960s. This area was used for accommodation and mess facilities for the nearby 2 Stores Depot (Regents Park) and the Ground Equipment Maintenance Squadron (Villawood). These properties were disposed of and subsequently acquired first by the Southern Cross Bible College and then by Salamah (Muslim) College.

Chester Hill is officially the gun capital of Sydney, with one registered firearm for every 3.8 residents according to 2015 police data.

All content from Kiddle encyclopedia articles (including the article images and facts) can be freely used under Attribution-ShareAlike license, unless stated otherwise. Cite this article:
Chester Hill Facts for Kids. Kiddle Encyclopedia.