South Granville is a suburb in western Sydney, in the state of New South Wales, Australia. It is located 18 kilometres (11 mi) west of the Sydney central business district, in the local government area of the Cumberland City Council.

South Granville is an extension of Granville. They share the postcode of 2142 along with the separate suburbs of Camellia, Holroyd and Rosehill.

Granville was named in 1880, after the British Colonial Secretary, the Granville Leveson-Gower, 2nd Earl Granville. 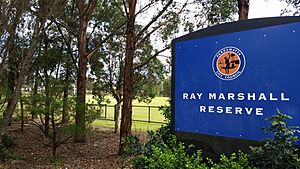 All content from Kiddle encyclopedia articles (including the article images and facts) can be freely used under Attribution-ShareAlike license, unless stated otherwise. Cite this article:
South Granville, New South Wales Facts for Kids. Kiddle Encyclopedia.