Holroyd is a small suburb in western Sydney, New South Wales, Australia. Holroyd is located 20 kilometres (12 mi) west of the Sydney central business district in the local government area of the Cumberland Council. The previous local government area of Holroyd City took its name from Arthur Holroyd, first Mayor of the area, local landowner and businessman. The administrative centre is located in nearby Merrylands.

Holroyd shares the postcode of 2142 with the separate nearby suburbs of Granville, South Granville, Camellia and Rosehill.

Arthur Todd Holroyd (1806-1887) acquired Sherwood Scrubs in 1855. Located in Merrylands, it was named after his former home in England. Holroyd became a Member of Parliament for Bathurst Plains then Parramatta, and was a judge for the NSW Supreme Court, had completed one year medical residency in London and was a keen businessman. He was respected and powerful and was on many and varied boards and committees. He became the first mayor of Holroyd Council, then the Municipality of Prospect & Sherwood, from 1872-1927 with only 250 ratepayers for first 9 years. He made clay pipes for drainage at Sherwood Scrubs and introduced drainage to the local area. He also encouraged the rail line to Parramatta Junction. 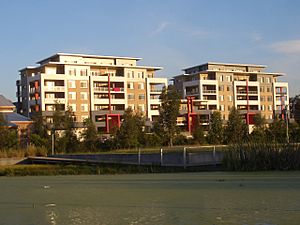 The suburb of Holroyd was created when the New South Wales Geographical Names Board sought to define suburb boundaries in 1999. Holroyd Council Local Government Area did not have a specific suburb of the same name and had to create one to satisfy the State Government requirements as carried out by the Geographical Names Board. The suburb named Holroyd was gazetted in 1999 with boundaries being Walpole Street (north), Neil Street (south) the railway line (east) and Pitt Street (west). There was a change to the boundary in 2001 with the northern boundary extended to the freeway.

The historic Goodlet and Smith Brickpit sites have now been redeveloped into Holroyd Gardens Park on the site of a clay pit that was later filled. Holroyd Gardens Estate which is a medium density development that includes the remaining heritage brickwork kilns and associated buildings.

All content from Kiddle encyclopedia articles (including the article images and facts) can be freely used under Attribution-ShareAlike license, unless stated otherwise. Cite this article:
Holroyd, New South Wales Facts for Kids. Kiddle Encyclopedia.