Camellia is a suburb of Sydney, in the state of New South Wales, Australia. Primarily industrial with no residential population, environmental remediation commenced in late 2015, with the suburb ear-marked as a major centre for future high density living.

Camellia is located 17 kilometres (11 mi) west of the Sydney central business district in the local government area of the City of Parramatta. The suburb is bounded by the Parramatta River to the north, Clay Cliff Creek to the west, Duck River to the east, and Grand Avenue. Major roads dissecting the suburb are Grand Avenue (east-west) and James Ruse Drive (north-south).

Camellia shares the postcode of 2142 with the separate suburbs of Granville, South Granville, Holroyd and Rosehill.

The first inhabitants and visitors

The Burramattagal clan were the indigenous people who originally inhabited this area, relying on the fish, shellfish, bird life reptiles and marsupials that were once abundant in the waterways and forests adjoining the Parramatta River and the freshwaters of Clay Cliff Creek.

On 22 April 1788 Governor Arthur Phillip and his party of officers and marines journeyed inland by boat from Sydney Cove to find better farmlands for the new settlement. They landed at the head of a navigable river near what is now Clyde, which he called Duck River due to the abundance of ducks in the area. They left their boats to explore the area but could not penetrate the thick bush. The party moved to the banks of Clay Cliff Creek, where they decided to camp because of its fresh water. 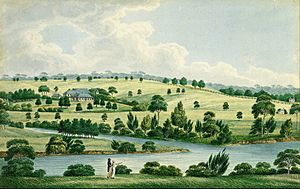 Romanticised painting of Elizabeth Farm viewed from the northern riverbank of Parramatta River by Joseph Lycett. The freshwater stream depicted in the middle as a tributary is Clay Cliff Creek.

...we fell in with an hitherto unperceived branch of Port Jackson harbour, along the bank of which the grass was tolerably rich and succulent, and in height nearly up to the middle, interspersed with a plant much resembling the indigo. We followed this branch westward for a few miles, until we came to a small fresh-water stream that emptied itself into it. Here we took up our quarters for the night, as our halts were always regulated by fresh water, an essential point by no means to be dispensed with, and not very abundant or frequently to be met with, in this country. We made a kettle of excellent soup out of a white cockatoo and two crows, which I had shot, as we came along. The land all around us was similar to that which we had passed.

—John White, Journal of a Voyage to New South Wales, 1790

Clay Cliff Creek was the common boundary of the land grants to wool pioneer John Macarthur, who by the early 1800s extended his land grants and his Elizabeth Farm holdings to gain the complete river frontage between the township of Parramatta and Duck River.

The railway station that opened here in 1885 was originally called Subiaco, but it caused confusion because this was the name of the Benedictine school on the opposite side of Parramatta River. In 1901, the station name was changed to Camellia, after the Camellia Grove Nursery nearby that specialised in growing Camellias. This land was leased by Silas Sheather since 1852 on what was originally part of the 850 acres (3.4 km2) of Elizabeth Farm.

Camellia railway station on the Carlingford Line was formerly part of the Sydney Trains network.

The Sandown railway line served the industry in Camellia. Passenger service ceased in 1991.

Grand Avenue is the main road in Camellia.

All content from Kiddle encyclopedia articles (including the article images and facts) can be freely used under Attribution-ShareAlike license, unless stated otherwise. Cite this article:
Camellia, New South Wales Facts for Kids. Kiddle Encyclopedia.