John Macarthur (1767 – 10 April 1834) was a British army officer, entrepreneur, politician, architect and pioneer of settlement in Australia. Macarthur is recognised as the pioneer of the wool industry that was to boom in Australia in the early 19th century and become a trademark of the nation. He is noted as the architect Farm House, his own residence in Parramatta, and as the man who commissioned architect John Verge to design Camden Park Estate in Camden, in New South Wales.

Macarthur was born near Plymouth, England the second son of Alexander Macarthur, who had fled to the West Indies after the Jacobite rising of 1745 before returning and working as a linen draper and 'seller of slops', according to some accounts. His exact date of birth is unknown, but it is known that his birth was registered on 3 September 1767.

He spelled his surname "M'Arthur" for most of his life. He often varied it to "MacArthur". The spelling "Macarthur" (with a lower case "a") became established only very late in his life. 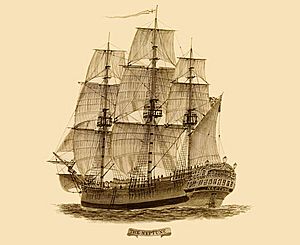 "The Neptune". She made five voyages for the British East India Company (EIC), the last one transporting convicts to Port Jackson as one of the vessels of the notorious Second Fleet

In 1789, John Macarthur was commissioned as an ensign in Fish's Corps, a regiment of the British Army formed to serve in the American War of Independence. The war ended before the regiment was ready to sail and was disbanded in 1783. On half-pay, Macarthur went to live on a farm near Holsworthy in Devon, where he evidently pursued a program of self-education and became interested in 'rural occupations'.

During the next five years Macarthur used his spare time to travel, read, and perhaps contemplate a future at the bar. Instead, in April 1788, Macarthur returned to full-pay army duties, securing a commission as an ensign in the 68th Regiment of Foot (later Durham Light Infantry), a regiment which had been stationed at Gibraltar since 1785. Ensuing negotiations with the War Office resulted in an alternative posting to far-away Sydney, with the New South Wales Corps in 1789. He sailed on the Neptune in the Second Fleet, the 'worst ship in the worst of Australian fleets'.

He arrived in Sydney in 1790 holding the rank of lieutenant and was appointed as commandant at Parramatta. In February 1793, the acting governor, Major Francis Grose, granted Macarthur 100 acres (0.40 km2) of land at Rose Hill near Parramatta. He was granted a further 100 acres (0.40 km2) in April 1794 for being the first man to clear and cultivate 50 acres (200,000 m2) of land. He named the property Elizabeth Farm in honour of his wife, Elizabeth Macarthur. Grose came to depend on Macarthur's administrative skills and appointed him as paymaster for the regiment and as superintendent of public works, but Macarthur resigned in 1796 to concentrate on his business and farming interests.

Establishes his flock of sheep 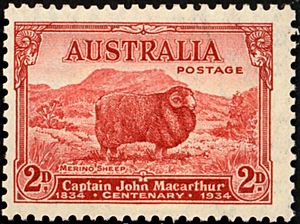 At Elizabeth Farm in 1794 he began his first experiments in improving wool growth by crossing hair-bearing Bengal ewes from India with Irish wool rams.

Macarthur visited England in 1801, taking specimens of the pure Merino wool, and of the best of the crossbred, and submitted them to a Committee of Manufacturers who reported that the Merino was equal to any Spanish Wool, and the crossbred of considerable value. This encouraged him to purchase rams and a ewe from the Royal Flock at Kew.

By 1801, Macarthur was the largest sheep rearer in the colony, although he was certainly not the only landowner to have experimented with the breeding of fine-wooled sheep. 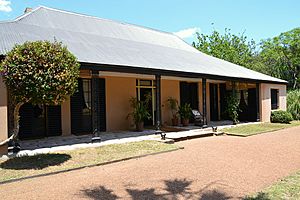 Elizabeth Farm House is one of the oldest remaining farmhouses in Australia, though all that remains of the initial house is said to be one room. It is regarded as one of the premier examples of early Colonial architecture in Australia.

The initial house was rectangular in plan, divided down the middle by a hallway with two rooms on either side. The house underwent many changes both immediately after construction and over time, the first of which being the addition of the north verandah. The verandah was a sign of prestige which indicated that the occupant was of a more leisured social class. The Elizabeth Farm verandah is also believed to be one of the first of its nature in Australia giving birth to a feature which has become characteristic of rural homesteads in the country, a tradition that continues to the present day. 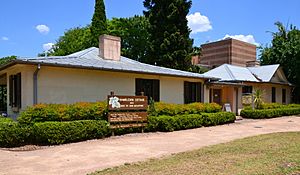 Hambleden Cottage was built in the early 1824 (by John Macarthur and Henry Kitchen), in the early Colonial Georgian style, a few hundred yards away at the bottom of the hill that Elizabeth Farm House sat upon making this homestead a group of buildings. The cottage was first occupied by John Macarthur's son, Edward, later becoming the home to a former governess.

Both the House and Cottage have managed to survive to the present day. Elizabeth Farm is managed by Sydney Living Museums (The Historic Houses Trust of NSW) while the cottage is run by the Parramatta and District Historical Society. 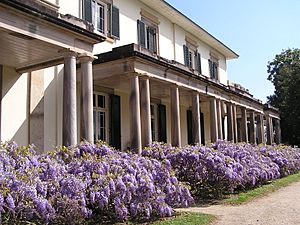 The estate consisted of 5000 acres of prime pasture land with two notable dwellings; the Camden Park House and the Belgenny Cottage.

Macarthur had then decided that the family would relocate to Camden and in turn, he commissioned Camden Park House. It was completed in 1835, just after the death of John Macarthur, having been supervised by his sons James and William Macarthur. John Verge and Mortimer Lewis drew up plans for Macarthur regarding the house and the design by Verge was subsequently chosen. The house stands on a rise amid its plantation of tree. A two storey wing was added in 1880 giving the overall look of the dwelling one akin with Old Colonial Regency. It is built of brick that has been stuccoed and limned like stone which combines with the use of local sandstone for the window surrounds and columns to add texture and colour to the building.

The descendants of John Macarthur continue to live in the Camden Park House. 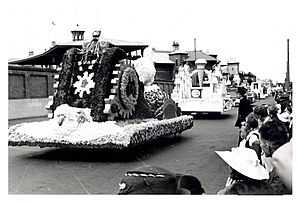 On his return to NSW Macarthur devoted himself to his farming. Wool had great advantages as an industry for New South Wales, which because of its distance from European markets needed a commodity which did not perish during long sea-voyages and which offered high value per unit of weight. Wool also had a ready market in England because the Napoleonic Wars had increased demand and cut English cloth-makers off from their traditional source of quality wool, Spain.

The export of wool soon made Macarthur the richest man in New South Wales. In 1822, The Society for the Arts in London awarded him two medals for exporting 150,000 lb (68,000 kg) of wool to England and for increasing the quality of his wool to that of the finest Saxon Merino.

In the early 1820s, John Macarthur was an owner of more than 100 horses. He established Camden Park Stud and was a major provider of bloodhorses. His sons, James and William Macarthur, followed in his footsteps and became important Thoroughbred owners and breeders.

Macarthur established Australia's first commercial vineyard. He imported vine plants when he returned to New South Wales in 1817, which he successfully cultivated at Camden Park. He was a founding investor in both the Australian Agricultural Company (London 1824) and the Bank of Australia (1826). In 1825 he was nominated to the New South Wales Legislative Council where he served until 1832.

John Macarthur died at Camden on 10 April 1834. His numerous and wealthy descendants remained influential in New South Wales affairs for many years. As the Macarthur-Stanhams and Macarthur-Onslows they are still wealthy but no longer prominent in public life. 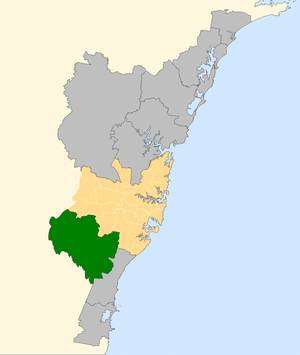 In recognition of his contribution to Australian agriculture, Macarthur was honoured by a postage stamp issued on the centenary of his death in 1934 (depicting a merino ram).

The Division of Macarthur was named in honour of John and Elizabeth Macarthur in 1949.

Both the Elizabeth Farm and Camden Park Estates are heritage listed and are now well looked after. They are also available for tours and other events, allowing the public to learn about the history of both.

He is a character in Eleanor Dark's semi-fictional Australian classic trilogy The Timeless Land. He also features in Naomi Novik's fantasy novel Tongues of Serpents.

All content from Kiddle encyclopedia articles (including the article images and facts) can be freely used under Attribution-ShareAlike license, unless stated otherwise. Cite this article:
John Macarthur Facts for Kids. Kiddle Encyclopedia.