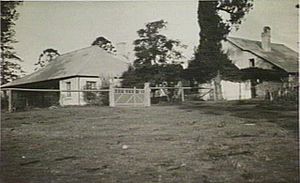 Elizabeth Macarthur (14 August 1766 – 9 February 1850) was an Anglo-Australian pastoralist and merchant, and wife of John Macarthur.

Elizabeth Macarthur was born in Bridgerule, Devon, England, the daughter of provincial farmers, Richard and Grace Veale of Cornish origin. Her father died when she was aged four years. Her mother remarried when she was 11, leaving Elizabeth in the care of her grandfather, John, and friends.

Elizabeth married Plymouth soldier John Macarthur in 1788. In 1790, with her newborn son Edward, she accompanied John and his regiment, the New South Wales Corps, to the recently established colony of New South Wales, traveling on the Second Fleet.

Elizabeth was the first soldier's wife to arrive in New South Wales. Being educated, articulate and well read, her letters provide an important record of the infant convict town of Sydney and colonial life. She was an amateur astronomer and botanist and enjoyed a privileged position in society where she "held court amongst officers of the New South Wales Corps, naval officers and members of the colonial administration".

John was made Commandant at Parramatta and received land grants in 1793 near there, at Rosehill, naming his property Elizabeth Farm after his wife. John became paymaster to the New South Wales Corps and director of public works. Elizabeth's respectability and charm was in contrast to her husbands disputatious nature and meant that she and her children retained a good social standing despite John's many controversial actions in the following years. However, Governor Phillip was the only governor she associated with, as her husband's business activities and actions later were "too controversial for any governor to seek the company of the Macarthur family".She had to travel to London leaving her family behind.

Elizabeth's work centred on her family, the education of her children and the management of a modest household. Elizabeth died in 1850, having first been estranged from her husband as his melancholia and paranoia deepened, and then surviving him by 16 years. She was an Anglican.

Between 1801 and 1805, John was living in England, first avoiding an arrest warrant for his role in the Rum rebellion of January 1808, and then because he refused to accept the terms for his return to New South Wales which were that he promise to be of good behaviour, etc. During this period, Elizabeth oversaw the family estates at Parramatta, Camden, Seven Hills and Pennant Hills. This included the management of household and business accounts, the employment of convict labour, the supervision of wool washing, baling and transport and the selection of rams and breeding to improve the flock. While John expressed his gratitude and admiration in her ability to cope, her irregular and inadequate correspondence was of constant concern. Nonetheless, her contribution was essential to the success of the enterprise and establishing New South Wales as a reliable supplier of quality wool. In England, John used his flair to promote the Australian wool industry while Elizabeth used her organisational ability and application to produce the wool.

During her husband's insanity and after his death in 1834, she continued to run the enterprises with great success until her death in 1850.

The Elizabeth Macarthur Agricultural Institute is named in her honour. It is the largest Centre of Excellence operated by New South Wales Department of Primary Industries, employing 200 scientists and located at Camden Park.

Elizabeth Macarthur is commemorated on the 1995 Australian five-dollar coin which was struck for inclusion in a special Masterpieces in Silver collector proof set entitled Colonial Australia.

One of Elizabeth's accounting books refers to a Machiping having made a linen press and other sundry items. He was paid 8 pounds in 1824. The desk is believed to survive in Milton House museum, in Milton NSW. Mak Sai Ying is believed to be the first Chinese man to live in Australia.

All content from Kiddle encyclopedia articles (including the article images and facts) can be freely used under Attribution-ShareAlike license, unless stated otherwise. Cite this article:
Elizabeth Macarthur Facts for Kids. Kiddle Encyclopedia.