Merrylands is a suburb in Western Sydney, Australia. Merrylands is located 25 kilometres west of the Sydney central business district and is in the local government area of the Cumberland City Council.

Merrylands was named after the former English home of Arthur Todd Holroyd (1806–1887), who acquired land in this area in 1855 and who gave his name to the adjoining suburb of Holroyd.

The Merrylands railway station is serviced by the Inner West & Leppington and Cumberland lines of the Sydney Trains network. There is unlimited parking for commuters. It is on the bus route from Liverpool to Parramatta. Main transport corridors of Woodville Rd (Parramatta-Hume Hwy, Western Motorway M4 (Mountains to the sea). Other main roads include Coleman St (to Westmead Hospital), Hawkesview Rd (rail overbridge to Woodville Rd), Neil St (rail overbridge to Woodville Rd), Pitt St (to Parramatta), Lois St and Excelsior St (to Granville).

With an entry Merrylands Road and Paton Street along the Cumberland Highway this nature reserve has kangaroos, emus, birdlife and waterfalls around the lake. Pinnaroo (Paton Street) and Yarrabee (Merrylands Road) can be hired for the day from Cumberland Council for a fee. Access is by road or bus from Merrylands Station and is a route of the Liverpool to the Parramatta Transitway.

Bounded by Centenary Road, Hollywood, Richmond and Fairmount Streets. Is used as a sporting field for cricket, soccer, softball and netball. 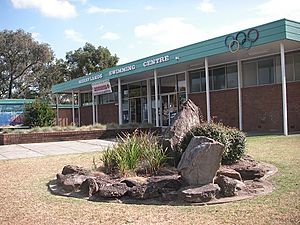 On the corner of Merrylands Road and Burnett Street this complex has sporting fields, tennis courts, barbecue areas and a swim centre which has several outdoor pools and a grassed areas with a barbecue.

Merrylands Swimming Centre was opened in 1968 and is owned and operated by Cumberland Council. The Swimming Centre was heated in 2004 and consists of 3 pools. An 8 lane 50m competition pool, a training pool and a babies pool. The water in the competition and training pools is heated to 27 °C. The centre is the home of the Merrylands Amateur Swimming Club – the second largest swimming club in the City of Cumberland and one of the largest in the South West of the Sydney Metropolitan Area.

Bounded by Merrylands Road (east of the railway line), Claremont Street, Montrose Avenue and Woodville Road the park is approximately 13.2ha in area. McDonald's has a restaurant on the corner of the park with access from Merrylands Road and Woodville Road. It has several sporting fields, a barbecue area, basketball court, cricket and nets, and playground equipment. When the circuses arrive they stay here.

During WWII Granville Park was used as US Naval Base Hospital No 10.

Several main cycle routes pass through Merrylands and surrounding suburbs and linking up to Liverpool, Penrith and Sydney Harbour. M4 has an exit in Crown Street, Parramatta for Parrmatta, Merrylands and Holroyd access.

Some of the current and former residents of Merrylands include:

All content from Kiddle encyclopedia articles (including the article images and facts) can be freely used under Attribution-ShareAlike license, unless stated otherwise. Cite this article:
Merrylands, New South Wales Facts for Kids. Kiddle Encyclopedia.