Guildford is a suburb of Sydney, in the state of New South Wales, Australia. Guildford is located 20 kilometres west of the Sydney central business district, in the local government area of Cumberland City Council. Guildford is part of the Western Sydney region. Guildford is the home of the first KFC in Australia.

Guildford was named in 1837, in honour of the Earl of Guildford.

Guildford is the home of the first KFC in Australia.

Lieutenant Samuel North was granted 640 acres (2.6 km2) in this area in 1817 and named his property Guildford, as he had ties with the Earl of Guildford. A small hamlet developed in the area around Woodville Road and by 1870 a school had opened here and a church was built here in the 1880s. After the railway station opened in 1876, a new settlement developed around it and the former settlement became known as Old Guildford.

Guildford is one of a small number of Sydney suburbs which houses the most significant portion of the Arabic-speaking diaspora in Australia. The first arrivals were from Lebanon in the 1970s following its civil war and since then numbers have grown to make Guildford one of Australia's true multicultural places, with many other resident nationalities and identities adding to the harmonious mix. The suburb has transformed in only 30 years into what is now a fast-growing and dynamic hub of Arab-Australian society, culture and food in Sydney.

Located in Cumberland Council, Guildford has a variety of schools, parks and sports grounds, pools, a locally significant retail precinct and several neighbourhood shops, a train station with parking, several churches and mosques and is on bus routes to Bass Hill, Yagoona, Bankstown, Harris Park, Merrylands, Parramatta, Liverpool, Auburn and Fairfield. The suburb also has notable commercial and industrial areas. 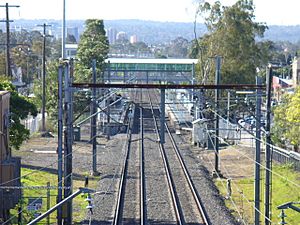 Guildford railway station is on the Inner West & Leppington and Cumberland lines of the Sydney Trains network. Guildford CBD is located around Guildford Railway Station.

Major industrial and commercial areas are located in Guildford Rd, Ferndell St - heading to Chester Hill, Cann St and surrounding streets west side near Guildford Railway Station which run into Yennora (which is 80% industrial). Some buildings in the main streets are in art deco style, as they were constructed in the 1930s. Guildford Rd is ornamented by crepe myrtles.

Guildford is home to historic house Linnwood which is listed as a building of state significance on the New South Wales Heritage Office State Heritage Register.

Linnwood Hall was the Home of George McCredie until his death in 1903. He was a prominent business man (whose brother Arthur was an architect of Sydney's Mark Foy's department store - now Downing Legal Centre), was a Member of Parliament and also Mayor of Municipality of Prospect and Sherwood from 1892-1895.

Sydney's oldest and perhaps most visible above ground water supply pipeline skirts most of the southern boundary of Guildford, and stretches from the pipe head at Guildford West to Potts Hill Reservoir near Bankstown. It passes under several streets, as well as Woodville Rd. (the main arterial road between Liverpool and Parramatta) and over the railway line south of the railway station. The three pipes, each 1.8 metres in diameter were built separately in 1888, 1901 and 1925.

There are several serviceable parks in Guildford.

Bounded by Guildford Rd, Tamplin Rd, Fowler Rd and Dennistoun Rd. This park complex consists of the local Swimming Centre and sporting fields. Named after George McCredie and was part of his land grant. He was a prominent local business man, Member of Parliament and Mayor of Municipality of Prospect and Sherwood 1892-1895 (now City of Holroyd).

The Swim Centre consists of an indoor all year round heated pool, outdoor pools, a skateboard track and ample parking. The Sporting fields are run by the Guildford Leagues Club.

Bounded by Railway Terrace, Bursill St and Marian St and Guildford Overbridge. This complex houses the local Bowling Club and Sports grounds and has a hall to rent. Local football, cricket and soccer teams use the main oval.

Only main entry off Campbell Hill Rd. Local Pedestrian access is at end of Dudley Rd. Has an area of 19ha with BBQ with shelters, toilets, a mini wetland, half basketball court, and sculptures. The park has some bush areas.

All content from Kiddle encyclopedia articles (including the article images and facts) can be freely used under Attribution-ShareAlike license, unless stated otherwise. Cite this article:
Guildford, New South Wales Facts for Kids. Kiddle Encyclopedia.