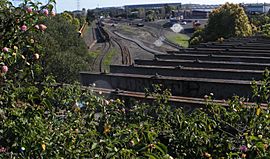 Chullora, a suburb of local government areas Canterbury-Bankstown Council and the Municipality of Strathfield, is located 15 kilometres west of the Sydney central business district, in the state of New South Wales, Australia. It is part of the Greater Western Sydney region.

The suburb of Chullora was originally part of the area known as Liberty Plains, which was land given to the first free settlers who arrived in Sydney Cove on 6 January 1793. In the 1950s, many immigrants from Europe were housed in the area. Once established, they moved to other parts of Sydney. Chullora was the name used for one of the estates in this area. Chullora is an Aboriginal word meaning 'flour'. The recent construction of the Tip Top Bakeries, has perhaps brought the suburbs back to its roots.

During World War II, Chullora was selected as the site for a major wartime manufacturing plant. The site once occupied several hundred acres of land surrounded by Rookwood Cemetery, Brunker Road, the Hume Highway and Centenary Drive. The site was said to have been the largest secret manufacturing plant in Australia which was used for the production of military weapons, plane components, tanks, HE Bombs and ordnance. Over two-thousand men and woman were employed to work at the factory on a daily basis. During the war the factory produced components for 700 Beaufort, 380 Beau fighter and up to 50 Lincoln aircraft. Over 54 ACI tanks were built as well as 60 General Lee tanks that were adapted for use in the Australian Military, as were local jeeps in the 1970s. The factory also produced 81 cupola turrets for the British Matilda tanks.

An underground "bunker" and tunnel system is located on this site. It is directly under a block flats in Davidson Street and Marlene Crescent. The entrance to the "bunker" is by steel doors set in concrete into the hillside in a railway cutting which runs from alongside the railway line parallel to Marlene Crescent at a platform called the Railwelders and which leads under the block of flats. The doors to this "bunker" were welded up in the late 1980s. The steel doors are no longer visible, and the associated area has been back filled.

Apart from the bunker, there is also a network of storage facilities that extend under the railway workshop. Sometime between 1977 and 1978 the steel access doors were fitted with locks (Railway SL type). The airshafts for this "bunker" are still clearly seen from the Hume Highway and some of them are within metres of the roadway. It has also been alleged that a tunnel approximately 6 km (4 miles) long connects this complex with Bankstown Bunker, (RAAF headquarters during World War II) on the corner of Marion and Edgar Street Condell Park. Access to this network of storage facilities was from a steel door, bolted into the side of a stormwater drain which runs along the old Roads & Traffic Authority building in Chullora, it then runs under the Hume Hwy and eventually under the rail workshop.

Hume Highway and Waterloo Road are the two main roads that run through the suburb. Waterloo Road is also the main road for the neighbouring suburb of Greenacre. Both suburbs share common amenities.

All content from Kiddle encyclopedia articles (including the article images and facts) can be freely used under Attribution-ShareAlike license, unless stated otherwise. Cite this article:
Chullora Facts for Kids. Kiddle Encyclopedia.