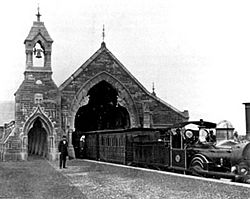 Rookwood is a suburb in western Sydney, in the state of New South Wales, Australia located 14 kilometres (8.7 mi) west of the Sydney central business district, in the local government area of the Cumberland Council. It is the easternmost suburb in greater western Sydney.

Rookwood Cemetery is the largest cemetery in the Southern Hemisphere.

Rookwood was named from a title of an 1834 novel by William Harrison Ainsworth (1805-1882). A railway station called Haslam’s Creek was opened in this area in 1859, on the railway line from Sydney to Parramatta. Samuel Haslam owned various grants beside the creek from 1804. Haslam’s Creek was the site of the first railway disaster in New South Wales in July 1858 which resulted in two deaths.

When the necropolis opened in 1867 it was known as Haslam’s Creek Cemetery. Residents disliked the association with the burial ground and in 1876 the suburb was renamed Rookwood. The name of the railway station was changed to Rookwood in 1878 and by the 1880s shops were established in the area. In 1891, the municipality of Rookwood was incorporated.

Over time, the necropolis had become known as Rookwood Cemetery. By 1898 residents were again agitated about the association of their suburb with the cemetery and in 1914, the railway station and the residential part of the suburb became Lidcombe. Later, Rookwood railway station that served the Rookwood Cemetery was located between the bridge over Arthur street and the westernmost junction of the Flemington rail yard.

Rookwood municipality amalgamated with Auburn in 1949.

All content from Kiddle encyclopedia articles (including the article images and facts) can be freely used under Attribution-ShareAlike license, unless stated otherwise. Cite this article:
Rookwood, New South Wales Facts for Kids. Kiddle Encyclopedia.