Strathfield South is a suburb, in the Inner West of Sydney, Australia in the state of New South Wales, 13 kilometres west of the Sydney central business district, in the Strathfield local government area.

North Strathfield and Strathfield are separate suburbs, to the north. Strathfield South is located between Liverpool Road (Hume Highway) and the Cooks River, bordered on the east by Coronation Parade and to the west by the Enfield Marshalling Yards.

This area was once part of the suburb of Enfield and was located within the former Enfield Municipal Council from 1889 to 1949. Gradually the boundaries have altered and eventually this area became known as Strathfield South.

Most of Strathfield South is located on two early land grants - the 1808 grant to James Wilshire (later known as the Redmire Estate) and the 1837 grant to Father John Joseph Therry, which became the Village of St Anne's. 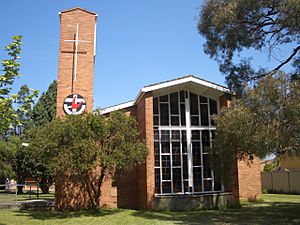 Wilshhire's grant was subdivided in 1867 and marketed as the 'Redmire Estate'. Roads in Strathfield South such as Dean Street and Water Street were established in this subdivision. A few early Victorian and Federation style homes survive from this early period of development.

Father John Joseph Therry was granted 47 acres (190,000 m2) in March 1837. To finance the building of the original St. Anne's Church (foundation stone laid July 1841) Father Therry offered 4-acre (16,000 m2) blocks for £25, but insufficient money being available, a further 134 allotments were offered for sale in 1854 and the streets of the subdivision named after Saints or dignitaries of the Church. The Historic Church of St Ann's has been included on the State Heritage Register.

The area around St Anne's Village and to the west of Cooks River was locally known as Bark Huts. Bark Huts was a hotel on Liverpool Road, halfway between Sydney and Liverpool, and a small settlement was established around the hotel. Other parts of this area were known as Druitt Town. This name was given to the area by Joshua Judge Josephson, who owned large areas of land in the area, in honour of his friend Major George Druitt.

All content from Kiddle encyclopedia articles (including the article images and facts) can be freely used under Attribution-ShareAlike license, unless stated otherwise. Cite this article:
Strathfield South, New South Wales Facts for Kids. Kiddle Encyclopedia.