Municipality of Strathfield facts for kids

Kids Encyclopedia Facts
This page is about the local government area. For the suburb, see Strathfield, New South Wales.

The Strathfield Council is a local government area located in the inner west region of Sydney, in the state of New South Wales, Australia.

Strathfield Council was incorporated in 1885. The Council area originally included the suburbs of Redmire, Homebush and Druitt Town. The name "Strathfield" was adopted as the name of the new council upon incorporation. In 1886, the suburb of Redmire was renamed Strathfield, as was the railway station. The area of Druitt Town became known as Strathfield South in the early 1890s. Only Homebush survives as an original location name. Since that time, Strathfield has become an important multicultural centre (for Korean, Chinese and Sri Lankan minority populations).

Strathfield Council currently comprises over 14.1 square kilometres (5.4 sq mi) of land and has appriximately 35,200 residents and is made up of residential neighbourhoods and town centres, with significant local heritage, open space, lifestyle amenities, public and private schools and access to tertiary institutions such as a campus of Australian Catholic University and the University of Sydney and TAFE Sydney Institute.

The Mayor of Strathfield Municipal Council is Cr. Andrew Soulos, an Independent.

Suburbs and localities in the local government area 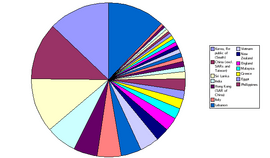 Overseas-born birthplaces based on 2001 Australian Census data for the Strathfield local government area. 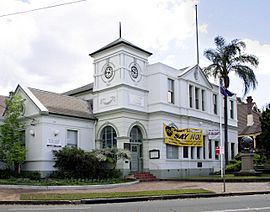 Throughout its history, there have been movements to amalgamate local councils in the Sydney area: the first major 'threat' was with the 'royal commission for a greater Sydney (1913)', known as 'The Greater Sydney Movement'. The Royal Commission brought together Sidney Webb,

In 1992, a section of the northern part of the Municipality was transferred to the Auburn Council area. In return, the area of and between Boundary Creek and the railway line, occupied by the former Ford factory building, was transferred from Auburn to Strathfield Council.

A 2015 review of local government boundaries by the NSW Government Independent Pricing and Regulatory Tribunal recommended that the Strathfield Municipal Council merge with adjoining councils. The government proposed a merger of the Burwood, Canada Bay, and Strathfield Councils to form a new council with an area of 41 square kilometres (16 sq mi) and support a population of approximately 163,000. On 6 May Strathfield Council commenced legal action in the NSW Land and Environment Court against the proposed amalgamation. After the Court heard that there were legal flaws in the report from the State Government appointed delegate who examined the proposal for merging the councils, the NSW Government withdrew from the case and the merger proposal stalled. 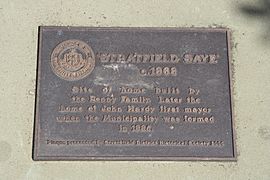 The Strathfield Council area has expanded in geography and population over time and now includes the suburbs of Strathfield, Homebush and Homebush West, Flemington, Greenacre, Strathfield South, Chullora (part) and Belfield (part).

The population of Strathfield is made up of a number of ethnic groups, and about 48% of the population born overseas. As a result, there are a number of services for newly arrived immigrants and overseas students who live in the area. Two such organisations are the Russian Ethnic Community Council of NSW Inc (RECNSW), and the Sydney Tamil Resource Centre Inc (STRC). RECNSW provides access to information and referral to mainstream services to recent immigrants of Russian and Russian speaking background and disseminates information to remote and offshore areas on a number of issues. STRC provides resources to Tamil immigrants.

Strathfield also has a number of community centres, including a Rotary club, Latvian theatre, Lantern Club, and libraries. The local Rotary club provides support to the community and has a number of projects in the area, as well as a Musical Society (part of Rotary?), which normally produces two shows a year in the Latvian Theatre in Strathfield. Their main social activity is rehearsing twice weekly and they present seven performances of their musical production over two weekends. Strathfield Lantern Club Voluntary is located in Strathfield and provides fundraising organisation for raising funds specifically for the Royal Institute for Deaf and Blind Children in North Rocks.

Strathfield has made its own unique contribution to pop. Strathfield was home during part of the 1960s to the Bee Gees (Redmyre Road) and several Australian indie rock and indie pop bands have emerged from Strathfield including Prince Vlad & the Gargoyle Impalers, Lunatic Fringe, The Upbeat, Women of Troy member Paul O'Reilly, and The Mexican Spitfires. Grant McLennan of The Go-Betweens also lived in Carrington Avenue, Strathfield for a number of years in the 1990s.

The lyrics of the song by Radio Birdman, Murder City Nights refers to Woodward Road, Strathfield:

Cruising down Woodward gotta find me some action
Looking for a lover with a power reaction.

Strathfield has also been home to a number of famous sporting identities including cricketers Bobby Simpson and Alan Davidson and three Prime Ministers, Frank Forde, Billy Hughes and George Reid.

The Strathfield Council area is located at 33°52'10" North, 151°5'59" West (33.8717, 151.0899). It covers a total area of approximately 14.1 square kilometres (5.4 sq mi) and includes the suburbs of Strathfield, Strathfield South, Homebush, Homebush West, Greenacre, Flemington and part of Belfield (in Australia, a local government area, incorporates many suburbs into its area). Homebush Bay Drive bounds Strathfield Council to the north, Powells Creek, The Boulevarde and Coronation Parade bounds it to the east, Punchbowl Road and Juno Parade form the southern border and Roberts Road, Chullora rail yards, Rookwood Cemetery and the Sydney Olympic Park Rail line bound the Municipality to the west.

For NSW state elections, the Municipality of Strathfield is divided between the Strathfield, Lakemba and Auburn electorates and for Federal elections it is in the electorates of Reid and Watson.

All content from Kiddle encyclopedia articles (including the article images and facts) can be freely used under Attribution-ShareAlike license, unless stated otherwise. Cite this article:
Municipality of Strathfield Facts for Kids. Kiddle Encyclopedia.