Kids Encyclopedia Facts
This page is about the Sydney region. For local government authority in Sydney, see Inner West Council.

The Inner West is the metropolitan area directly to the west of the Sydney central business district, New South Wales, Australia. The suburbs of the Inner West are predominantly located along the southern shore of Port Jackson (Parramatta River), stretching south to the shores of the Cooks River.

The Inner West is an imprecise geographical region. The Australian Government Bureau of Statistics, the New South Wales Government Department of Planning and Infrastructure, and local media variously describe the Inner West region to include the local government areas of:

Prior to the arrival of the First Fleet, the Sydney region was home to the Darug people. This nation was broken up into a number of Aboriginal clans who tended to live in a certain geographic area. Each clan contained about 50 to 100 people and, to avoid genetic problems, the men would marry women from other clans. So the clans were interrelated and members from one clan would frequently travel in the territory of others, including to hunt, trade and perform ceremonies. They didn't consider themselves owners of the land, rather custodians.

What is now the Inner West was formerly home to two clans, the Cadigal, whose land stretched along Port Jackson from South Head to Lewisham, and the Wangal, whose land was immediately to the west of the Cadigals and stretched to about Homebush Bay. Other clans that would have been regular visitors to the area would have included the Birrabirragal and Muru-ora-dial in what is now the Eastern Suburbs, the Bediagal and Kameygal from the Cooks River area to the south, the Burramattagal from the Parramatta area to the west, and the Wallumattagal, Cammeraigal and Gorualgal from the northern shores of the Parramatta River. 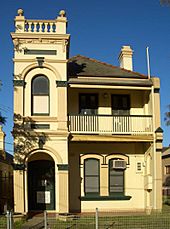 House in Marrickville a suburb of Sydney's Inner West

The topography of the Inner West reflects rolling hills intersected by shallow valleys through which waterways including Iron Cove Creek, Hawthorne Canal (formerly Long Cove Creek), Whites Creek and Johnstons Creek flow. These waterways have been drastically altered since the late 19th century by the means of concrete lining. For example, in the 1860s Iron Cove Creek was a freely flowing waterway which in places broadened into ponds that made excellent and picturesque swimming holes. It is now barely a trickle lined by residential areas, parkland and fast-food restaurants.

Parramatta Road runs through the middle of this area. Although still playing only a small part in the overall transport task, use of bicycles for transport has increased significantly in the Inner West since the 1990s. Denser populations and shorter distances mean cycling is often quicker and more convenient than driving or taking public transport. A network of bicycle paths, signed bicycle routes on local streets and other aids to safe and convenient cycling is developing. Main bicycle routes include an East-West route from Five Dock to the Anzac Bridge cycleway, a Northwest route from Gladesville Bridge to Anzac Bridge, a Southwest Route from Marrickville to the City via Newtown. Groups of local bicycle user groups (BUGs) provide help for new cyclists, under the parent banner of Bicycle New South Wales.

All content from Kiddle encyclopedia articles (including the article images and facts) can be freely used under Attribution-ShareAlike license, unless stated otherwise. Cite this article:
Inner West Facts for Kids. Kiddle Encyclopedia.