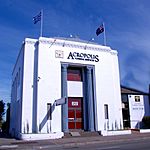 Earlwood is a suburb of Sydney, in the state of New South Wales, Australia. Earlwood is located 12 kilometres south of the Sydney central business district, in the local government area of the Canterbury-Bankstown Council. Since the 1960s, the area has been strongly associated with Greece and Greek culture.

Earlwood stretches from the southern bank of the Cooks River to the northern bank of Wolli Creek. Marrickville is located to the east across Cooks River. Earlwood is primarily residential with some commercial developments around the main road, Homer Street.

Earlwood began as a land grant obtained by John Parkes in 1827. John Parkes and his sons operated logging camp called Parkes Camp in 1829 and felled the timber on his 50-acre grant. Later it became known as Parkestown. The name was changed to Forest Hill around 1905-06 and changed again to Earlwood in 1918. 'Earl' reportedly commemorated a former mayor of Canterbury and 'Wood' was the name of two brothers who owned a pig and poultry farm on Wolli Creek. The 'Earlwood' estate was a subdivision in the area of Earlwood Primary or Public School.

Early residents included F. and A. Martin who were granted land in the eastern part, and Joshua Thorpe, architect and Assistant Colonial Engineer, whose 80-acre (32 ha) estate was in the west, stretching from Cooks River to Wolli Creek. In 1828, Joshua Thorp built a house he called Juhan Munna, an Aboriginal phrase meaning "to go away." The house was later renamed Undecliffe and rented to managers of the Canterbury Sugarworks. The property was bought by the solicitor P.A.Tompson in 1850. In 1854, Tompson built a bridge on the site of Thorp's punt.

Frederick Wright Unwin, solicitor and director of the Australasian Sugar Company, obtained land in the Undercliffe area, east of Thorp's property, in 1840, and built his home, which he called Wanstead. Initially, a punt was used to cross the Cooks River. Later, a wooden bridge was built and the road eventually became known as Unwins Bridge Road. The name of the property survives in Wanstead Avenue and Wanstead Reserve. Abraham B. Pollack acquired eight grants in the 1830s, totalling 790 acres (320 ha), which covered most of Earlwood and Undercliffe. Subdivision began in the 1880s.

After World War I, a war services subdivision was created west of Wardell Road for retired soldiers and their families. The streets of that subdivision commemorate the names of famous men and battles connected with the war, such as Kitchener, Hamilton, Vimy, Fricourt, Polygon, Thompson and Guedecourt. The area incorporating Bedford, River, Grove, Richmond, and Stone streets was a subdivision known as the Canterbury estate and was divided for workers of the quarry at the end of River Street. This estate also took in Louisa, Sparke, Caroline, Elsie and Ann streets and also Willow lane, some of the streets had different names to those that they are known by today. A notable occupant of the area was the Scott family which operated the Scotties tissue factory on the corner of Louisa and River Streets.

Between 1912 and 1957, electric trams operated along Homer Street to Earlwood, providing service to the city via Marrickville and Newtown. The service is now provided by buses.

Earlwood is serviced by a number of bus routes by State Transit Authority and Punchbowl Bus Company.

Earlwood was previously the end of the line for electric tram services running on a similar route to that of the current 423 bus service, an extension from the bottom of the hill at Undercliffe.

Earlwood is a multicultural area, having a large proportion of Greek-Australians. Nearby Marrickville was a major centre of Sydney's Greek community in the 1950s and 1960s and many of its residents moved south into suburbs like Earlwood, which offered larger family homes and blocks of land. 20.4% of the population reported Greek ancestry at the 2011 Census.

The following notable people have lived in Earlwood:

Earlwood is sometimes mistakenly classed as a part of Sydney's Inner West. This is, however, topographically incorrect as the Cooks River which separates Earlwood from Marrickville forms a natural defining boundary around the outer limits of the Inner Western Suburbs.

All content from Kiddle encyclopedia articles (including the article images and facts) can be freely used under Attribution-ShareAlike license, unless stated otherwise. Cite this article:
Earlwood, New South Wales Facts for Kids. Kiddle Encyclopedia.