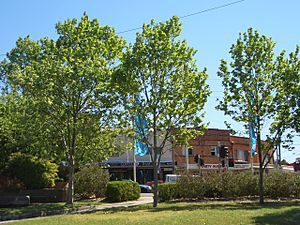 Bexley North is a suburb in southern Sydney, in the state of New South Wales, Australia 13 kilometres south of the Sydney central business district. It is part of the St George area. Bexley North is in the local government area of the Bayside Council.

James Chandler named Bexley after his birthplace in London (formerly Kent), England. Chandler bought Sylvester’s Farm in 1822, from Thomas Sylvester who had been granted the land about ten years earlier. That year he was also granted 1,200 acres (4.9 km2) of land which stretched from what is now Bexley North to most of Rockdale and Kogarah. Development in the area began in 1884 with the railway line to Hurstville.

The opening of the East Hills line and the railway station at Bexley North in 1931, opened up the area for home sites.

The M5 South Western Motorway runs south-west towards Beverly Hills and Liverpool. There are no entrances at Bexley North to the 4 km tunnel which begins here and heads north-east towards Botany and the city. Access to the north east of the motorway is allowed at Kingsgrove and Arncliffe.

All content from Kiddle encyclopedia articles (including the article images and facts) can be freely used under Attribution-ShareAlike license, unless stated otherwise. Cite this article:
Bexley North, New South Wales Facts for Kids. Kiddle Encyclopedia.