Bexley is a suburb in southern Sydney, in the state of New South Wales, Australia. Bexley is located 14 kilometres south of the Sydney central business district, in the local government area of the Bayside Council and is part of the St George area.

James Chandler named the suburb after his birthplace, Bexley in the south-east of London, England. Chandler bought Sylvester’s Farm in 1822, from Thomas Sylvester who had been granted the land about ten years earlier. That year he was also granted 1,200 acres (490 ha) of land which stretched from what is now Bexley North to most of Rockdale and Kogarah. The estate was heavily timbered and a track through the centre, used by timber-getters, is today called Forest Road. Queen Victoria Street, Gladstone Street and Beaconsfield Street commemorate the British Queen and two of her prime ministers. Chandler was a well-respected citizen and became known locally as the Squire of Bexley, but his property attracted bushrangers, escaped convicts and other odd types. Chandler was not happy with his ill-assortment of neighbours and sold the land to Charles Thompson in 1836. Later it was bought by Charles Tindell, who began subdividing the land by 1856 for home sites. 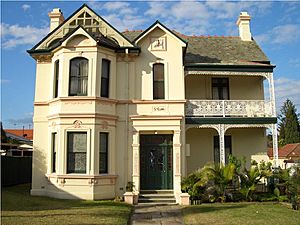 Lydham Hall, the oldest surviving residence in the area, stands on part of the original land grant of 1822. Joseph Davis settled in this historic residence in the late nineteenth century. Herbert and Frederick Streets are named after his two sons. Henry Kinsela lived on Kinsel Grove. George Preddy occupied Besborough, part of which became Bexley Park.

Dick Stone sold meats in Bexley and Rockdale from 1868. Stone’s Slaughterhouse in Stoney Creek Road began operations in the 1890s. Cattle, sheep and pigs were driven from Homebush to the abattoirs in Kingsgrove until they closed in 1920.

An upsurge in development began after the railway line to Hurstville was opened in 1884. A two-tier wagonette and hansom cab conveyed train travellers to their homes and in 1909 a steam tram ran between Bexley and Arncliffe. Many inns opened in the area including the Man of Kent, the Robin Hood and Little John Inn and the Highbury Barn. In 1900, Hurstville Council ceded its Bexley ward which became Bexley council. Bexley Council was merged with Rockdale Council in 1948 to form the Municipality of Rockdale.

In the 1980s and 1990s, Bexley underwent serious decline since its main street, Forest Road, was on the major truck route between Port Botany and the start of the M5 Motorway at Beverly Hills. This changed in the late 1990s with the completion of the M5 East Motorway and the subsequent bypass of most heavy and commuter traffic from the main street. The opening of Westfield Hurstville in 1979 also contributed to the decline of the Bexley shopping strip.

Bexley is currently served by State Transit Authority government buses, Transdev NSW and Punchbowl Bus Company private buses. A steam tramway opened on 13 October 1909 and operated from Arncliffe railway station via Firth and Done Streets and then onto Wollongong, Forest and Stoney Creek Roads to Bexley Park, near Preddys Road. It closed on 1 January 1927. 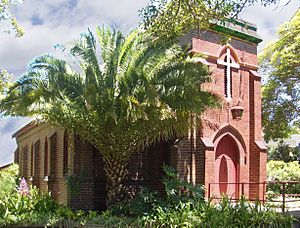 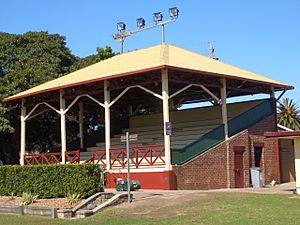 Bexley possesses an extremely wide range of houses in various architectural styles. The following is a small sample.

All content from Kiddle encyclopedia articles (including the article images and facts) can be freely used under Attribution-ShareAlike license, unless stated otherwise. Cite this article:
Bexley, New South Wales Facts for Kids. Kiddle Encyclopedia.