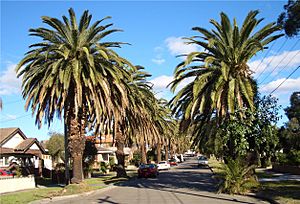 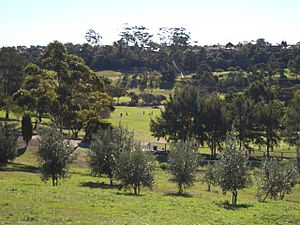 Bardwell Valley is a suburb in southern Sydney, in the state of New South Wales, Australia. Bardwell Valley is located approximately 12 kilometres south of the Sydney central business district, in the local government area of the Bayside Council and is part of the St George area.

Bardwell Valley is a primarily residential area. Some beautiful sandstone cottages from the early 20th century still stand in East Street and The Glen Road. Bardwell Creek runs through the middle of the valley and empties into Wolli Creek.

Prior to European settlement, Bardwell Valley was a significant part of the lands of the Cadigal people. Bardwell Valley was originally the name used to describe the land beside Bardwell Creek in the suburb of Bardwell Park. The suburb was formed in 1996 from parts of Arncliffe that bordered the valley and creek.

After much development had taken place in the Arncliffe and Bardwell Park areas during the early 1900s, Bardwell Valley was the last remaining area with any significant cover of natural vegetation. As early as 1945, it had been suggested that the area would be the ideal location for a golf course.

According to the 2011 census of Population, there were 2,205 residents in Bardwell Valley. 62.3% of residents were born in Australia. The most common other countries of birth were Lebanon 5.3%, China 3.1% and Macedonia 2.5%. 50.3% of residents spoke only English at home. Other languages spoken at home included Arabic 15.6%, Greek 8.0% and Macedonian 3.9%. The most common responses for religious affiliation were Catholic 23.0%, Islam 17.9% and Eastern Orthodox.

All content from Kiddle encyclopedia articles (including the article images and facts) can be freely used under Attribution-ShareAlike license, unless stated otherwise. Cite this article:
Bardwell Valley, New South Wales Facts for Kids. Kiddle Encyclopedia.