Arncliffe is a suburb in southern Sydney, in the state of New South Wales, Australia. Arncliffe is 11 kilometres south of the Sydney central business district, in the local government area of the Bayside Council. Arncliffe is part of the St George area.

Arncliffe is south of the Cooks River and Wolli Creek, close to Sydney Airport. Arncliffe is a mostly residential area featuring low density detached and semi-detached houses and some medium density town houses and blocks of flats. There are also some areas of commercial and light industrial developments.

Arncliffe's name comes from a small village called Arncliffe in North Yorkshire, England. The name appears in the Domesday Book of 1086, as 'Arneclif', meaning Eagle Cliff. Ron Rathbone in his book "A Village Called Arncliffe" says that an early land speculator, William Hirst, created a subdivision in 1840. It was named The Village of Arncliffe Estate. William Hirst was born in Settle, Yorkshire. Settle is a market town serving a cluster of villages, of which Arncliffe is reputed to be the prettiest. Rathbone says it is likely that Hirst gave Arncliffe its name, although it was more than two decades before it received official recognition.

Alderman E.G. Barton, worked to develop the district, including the reclamation 120 acres (0.49 km2) of swampland where Barton Park and Kogarah Golf Links now stand. James Beehag also owned land in the area and later became one of Rockdale's early mayors.

The original inhabitants of the area were tribes of Indigenous Australians. There is evidence to suggest that these people belonged to the Gweagal, Bidjigal and Cadigal clans. Valleys of local creeks, Wolli Creek and Bardwell Creek contain evidence of Aboriginal presence in smoke-blackened caves. Reuben Hannam, a brickmaker, was granted 100 acres (0.40 km2) of land in 1825 along the banks of Wolli Creek. His son, David Hannam, obtained a 60-acre (240,000 m2) grant near the Cooks River in 1833 directly behind the Tempe estate. Alexander Brodie Spark (1792–1856) purchased the estate on the Cooks River in 1826 and built Tempe House in 1828. This part of the suburb is today known as Wolli Creek. Later, both Rocky Point Road and Gannons Forest Road ran through Hannam's grant, now known as the Princes Highway and Forest Road.

Originally, Arncliffe Hill was known as Cobbler's Hill and the area became the vegetable garden for Sydney. When Hannam's land was subdivided, many new small holdings became farms, spreading towards Black Creek or Muddy Creek. Allotments in the village of Arncliffe were between 10 and 20 acres (81,000 m2). In 1843, newspaper advertisements declared that there was 'money to be made by woodcutters and farming men and persons about Cook's River'. In 1856 another subdivision, Tempe, was described as being close to the village of Arncliffe, described as having "all the characteristics of an English village, being beautifully situated amidst quiet rural scenery, spotted here and there with neat cottages which charm the eye with their pretty, well trimmed gardens, perfect pictures of competence and content". 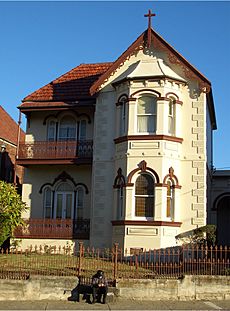 Athelstane, owned by W.G. Judd, was a notable home in the district. The large house gave its name to the avenue it was built on and later became the site of Athelstane Public School. Another main street, Barden Street, was named after Frederick Barden whose house, Highbery Heights, stood nearby. Arncliffe had many grand and gracious Victorian era houses. Too many have been demolished, or fallen into disrepair, been subdivided and so on, but in the most recent years there have been some attempts to preserve these as part of local heritage. Two-storey semi-detached dwellings, Gladstone and Wentworth on Forest Road, were built by Hurstville builder Robert Newell for rental to 'well to do' tenants. Dappeto on Wollongong Road built in 1885 by oyster merchant Frederick Gibbins, later became a home for children and now houses a Salvation Army chapel, as part of a nursing home and retirement village. 'Belmont' and 'Fairview' are identical Victorian homes built in 1884 by two Irish brothers Thomas and Alexander Milsop, who made their fortunes in the goldfields. 'Meryton' was erected by building contractor Alexander Fell in 1885. 'Coburra' was built in 1905 but was more typical of the earlier Victorian era. Arncliffe Post office is a Federation style building opened in 1906 and originally contained the post master's residence upstairs.

The railway line which cut through Arncliffe Hill opened in 1884. The name of the district engineer for railways T.R. Firth is reflected in Firth Street which runs parallel to the railway line. Arncliffe Park was originally the property of Kim Too and cultivated as a market garden. The garden was officially proclaimed a public park in March 1889. The avenue of trees was planted around 1904. Over the years, Arncliffe has hosted a stinking boiling down works (1870s), a sewerage farm (1886–1916) and various factories and workshops throughout the 20th century, particularly after WW2. These included the Streets Ice Cream factory and Fontana Films, where the film "Jedda" was produced with many of the scenes shot in Arncliffe. Both Streets and Fontana have now closed.

The Arncliffe to Bexley steam tramway opened in 1909 and connected with trains at Arncliffe station. The line ran down Wollongong Road, then Forest Road through Bexley before terminating at the corner of Forest and Preddys Roads, Bexley. The line was single track, with a passing loop midway. A small car shed at Arncliffe maintained the trams. The line closed in 1926. 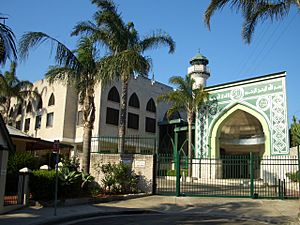 Arncliffe was settled by people from a variety of backgrounds. Original settlers in the area included British, Irish, Chinese from the goldfields and Germans who tended their vegetable gardens. In the early days, Germans represented the largest non-Anglo-Celtic migrant group in Australia.

From the 1960s Arncliffe has become home to many immigrants from around the world. The first wave included Greeks and Italians who began moving south from Sydney's inner-city suburbs. In 1963, after an earthquake devastated much of Macedonia) and northern Greece, more southern European families arrived in the area. From the late 1970s, they were joined by many families from Lebanon, who sought asylum from the civil wars and ongoing conflict in the Middle East and Lebanon. Sixty percent of Arncliffe's residents now come from backgrounds other than the predominantly Anglo-Saxon and Irish origins of the earlier immigrants.

Arncliffe exhibits much evidence of the diversity of its population, including architectural styles ranging from Victorian through Federation era cottages to latter-day 'statement mansions'. The Al-Zahra Mosque and St Mark's Coptic Orthodox Church reflect the diversity of the community. A dedicated olive grove, in Jubilee Park, that is now part of Bardwell Valley, was created in recognition of the contribution made to the City of Rockdale by citizens who have their origins in Greece. 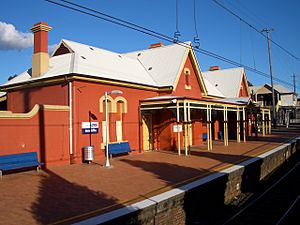 The Princes Highway runs north towards the city and south towards Rockdale and Kogarah. The other main roads through the suburb are Forest Road and Wollongong Road which run south towards Hurstville. The M5 South Western Motorway runs south-west towards Beverly Hills, Liverpool and north-east towards Botany and the city. A 4 km tunnel runs partly underneath Arncliffe with entrances and exits on Princes Highway and Marsh Street, near the airport.

Arncliffe railway station is on the Illawarra line of the Sydney Trains network. The station is serviced by an 'all stations' service from Hurstville to the Sydney CBD, terminating at Bondi Junction.

Arncliffe is also serviced by the 473, 410 and 400 government bus routes. The 473 runs from Rockdale, Bardwell Valley, Arncliffe, Turrella station, Earlwood, Clemton Park, and on to Campsie. The 400 runs from Bondi Junction in the eastern suburbs, through Kingsford, Pagewood and Mascot to the Sydney Airport terminals, then through Arncliffe to Rockdale and on to Burwood. The Prepay only route 410 follows the 400 route except it terminates at Rockdale and does not stop at the Airport terminals. 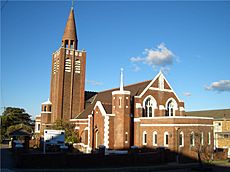 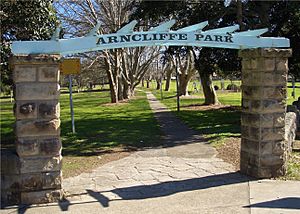 The site of the former Arncliffe Bowling Club and Bowling Greens in Bonar Street has recently been rezoned for high density residential, along with commercial areas surrounding it. Its close proximity to Arncliffe railway station makes it attractive to developers, who plan to convert this commercial area into high density apartments.

Arncliffe's Earl Park was the home ground of New South Wales Rugby Football League Premiership club, St. George from 1925 to 1939, and was the site of the infamous 1928 Earl Park riot.

Arncliffe has a number of social venues including: 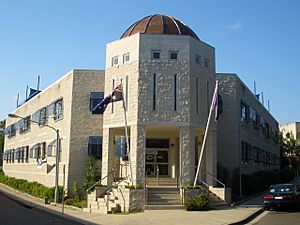 According to the 2011 census of Population and Housing, there were 8,420 persons usually resident in Arncliffe. 50.3% were male and 49.7% were female. 0.8% were Indigenous persons, compared with 2.5% Indigenous persons in Australia.

Languages: According to the 2011 census, English was the only language spoken at home by 36.1% of Arncliffe residents. The most common languages other than English spoken at home were: Arabic 22.6%, Macedonian 7.8%, Greek 4.5%, Italian 2.4% and Cantonese 2.2%.

Arncliffe borders an extremely important piece of remnant bushland, the Wolli Creek Valley, beside Wolli Creek. There have been very active movements fighting for its preservation in the face of demands for land. The most successful of these prevented the building of a tollway through the valley, resulting in the road being built as a tunnel under the valley. Some community concern remains over the release of insufficiently filtered particle pollution from exhaust emissions into the atmosphere in the Bardwell Valley.

Another important community issue is potential overdevelopment, with high-density housing development occurring around the new Wolli Creek railway station. This area in the northern part of Arncliffe, officially became the separate suburb of Wolli Creek in 2002.

Bardwell Valley was originally a locality beside Bardwell Creek, adjoining the suburb of Bardwell Park. The valley was famous for its golf course and golf club. Bardwell Valley became a new suburb in 1996, formed from parts of Arncliffe that border the valley. Bardwell Park was named after free settler Thomas Hill Bardwell who owned land in the area.

All content from Kiddle encyclopedia articles (including the article images and facts) can be freely used under Attribution-ShareAlike license, unless stated otherwise. Cite this article:
Arncliffe, New South Wales Facts for Kids. Kiddle Encyclopedia.