Kogarah is a suburb of southern Sydney, in the state of New South Wales, Australia. Kogarah is located 14 kilometres south of the Sydney central business district and is considered to be the centre of the St George area.

Kogarah took its name from Kogarah Bay, a small bay on the northern shore of the Georges River. The suburb originally stretched to the bay but has since been divided up to form the separate suburbs of Kogarah Bay and Beverley Park.

Kogarah has a mixture of residential, commercial and light industrial areas. It is also known for its large number of schools (including primary school, high school and tertiary education) and health care services (including two hospitals and many medical centres). The NRL side, St George Illawarra Dragons have their Sydney office based at nearby WIN Jubilee Oval, often referred to as Kogarah Oval. Kogarah features all types of residential developments from low density detached houses, to medium density flats and high density high-rise apartments. 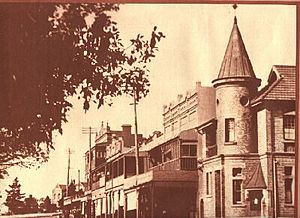 Railway Parade in 1915. The former Kogarah Post Office on the right was built in 1892 and is now a community centre

Kogarah is derived from an Aboriginal word meaning rushes or place of reeds. It had also been written as 'Coggera', 'Cogerah' and 'Kuggerah' but the current spelling was settled when the railway line came through the area in the 1880s.

Early land grants in the area were made to John Townson (1760–1835) who received 910 hectares (2,250 acres) from 1808 to 1810, centred on Hurstville and James Chandler, whose neighbouring estate was centred on Bexley. The district provided fruit, vegetables and oysters for Sydney. In 1869, St Paul's Church of England opened on Rocky Point Road (now Princes Highway). It was built on 0.81 hectares (2 acres) of land given to the church by William Wolfen the Swedish Consul to Sydney, who owned 320 hectares (800 acres) in Kogarah. The suburb grew around the church and the Gardeners Arms Hotel. Kogarah became a municipality in 1885.

The former neighbourhood of Moorefield is now part of Kogarah. It was originally a 24-hectare (60-acre) land grant from Governor Lachlan Macquarie in 1812 to Patrick Moore, who built a fine house there. The Moorefield racecourse built by a descendant opened in 1888. Brigadier General John Lamrock CB VD was appointed secretary of the Moorefield Race Club in 1912 and remained in that position until early in 1935. The Moorefield estate was subdivided in the 1950s and the Department of Education purchased 7.7 hectares (19 acres), where it built two high schools and college of further education. Moorefields Girls High School was erected there in 1955 on the former site of Moore's farm.

The entire City of Kogarah and surrounding areas rely on bus, train and taxi services that operate from the centre of Kogarah's shopping district. Bus and train services accommodate the large population within Kogarah, as well as the large number of schools in the area.

Kogarah railway station is located on the Illawarra line of the Sydney Trains network. The station sits below a concourse and a small shopping complex called the Kogarah Town Centre. In the late 1990s, the station underwent extensive renovations which added easy access facilities such as elevators from the concourse onto each of the four platforms.

Buses from Kogarah service surrounding suburbs, particularly those along the beach such as Brighton-Le-Sands, Monterey, Ramsgate Beach, Sans Souci etc. which rely heavily on bus services since they are far from railway stations. Until 1937, a steam tramway operated between Kogarah and Sans Souci via Rocky Point Road. This was replaced by an electric trolleybus service, one of only two such services to operate in Sydney. This was subsequently replaced in the 1950s with the current diesel government bus routes that currently operate. The majority of public transportation in Kogarah departs and arrives close to Kogarah Town Centre.

Kogarah is also serviced by St George Community Transport, a HACC funded transport service for the Frail Aged, people with disability and their carers.

The Kogarah area also features many parks and reserves, with no shortage of sports playing fields. These include Hogben Park, Frys Reserve, Scarborough Park, Kogarah Park and Jubilee Oval. 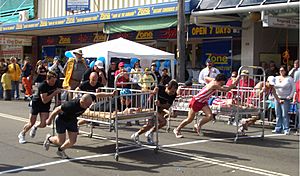 St George Illawarra Dragons have played rugby league at Jubilee Oval since 1935 and following a merger with the Illawarra Steelers also has WIN Stadium as a home ground. 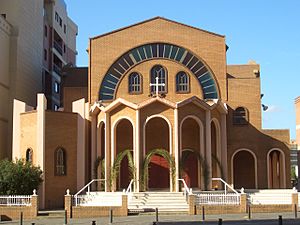 According to the 2011 Australian Bureau of Statistics Census of Population, there were 12,764 people usually resident in Kogarah. 63.2% stated they were born overseas with the top countries of birth being China 12.0%, Nepal 6.5% and Bangladesh 4.4%. English was stated as the only language spoken at home by 30.0% of residents and the most common other languages spoken were Mandarin 10.2%, Nepali 6.8% and Cantonese 6.7%. The most common responses for religious affiliation were Catholic 20.0%, No Religion 18.2% and Orthodox 12.6%.

All content from Kiddle encyclopedia articles (including the article images and facts) can be freely used under Attribution-ShareAlike license, unless stated otherwise. Cite this article:
Kogarah, New South Wales Facts for Kids. Kiddle Encyclopedia.