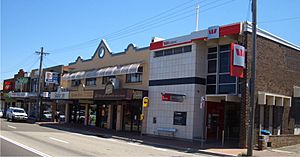 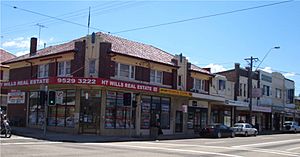 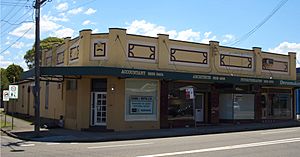 Ramsgate is surrounded by the suburbs of Ramsgate Beach, Monterey, Kogarah, Beverley Park and Sans Souci.

The area between Cooks River and Georges River was originally known as Seven Mile Beach. It was changed to Lady Robinson’s Beach in 1874 to honour the wife of Governor Sir Hercules Robinson. Cook Park is named after Samuel Cook who advocated it as a public pleasure area. Ramsgate was named after the seaside resort in England. A model village was originally planned for the suburb but later abandoned.

Scarborough Park was created in the 1830s from part of Pat Moore's Swamp or Patmore Swamp. Patrick Moore was granted 60 acres (240,000 m2) of land in 1812. It was named by the Hon. Thomas Holt after the English coastal town of Scarborough, Yorkshire and the First Fleet convict ship which was briefly anchored in Botany Bay in 1788.

According to the 2006 Australian Bureau of Statistics Census of Population, there were 1,053 people usually resident in Ramsgate. 25.7% stated they were born overseas with the top countries of birth being Greece 4.2%, United Kingdom 3.6% and Egypt 3.1%. English was stated as the only language spoken at home by 57.8% of residents and the most common other languages spoken were Greek 10.6%, Arabic 5.3% and Portuguese 1.7%. The most common responses for religious affiliation were Catholic 24.6%, Anglican 21.1% and Orthodox 16.1%.

All content from Kiddle encyclopedia articles (including the article images and facts) can be freely used under Attribution-ShareAlike license, unless stated otherwise. Cite this article:
Ramsgate, New South Wales Facts for Kids. Kiddle Encyclopedia.