The source of the Georges River is upland swamps of the O'Hares Creek catchment, approximately 80 kilometres (50 mi) to the south-west of Sydney central business district between the town of Appin and the Illawarra Escarpment. The river travels for approximately 96 kilometres (60 mi) in a north and then easterly direction to its mouth at Botany Bay, about 5 kilometres (3.1 mi) from the Tasman Sea. The Georges River is the main tributary of Botany Bay; with the Cooks River being a secondary tributary.

The total catchment area of the river is approximately 930.9 square kilometres (359.4 sq mi) and the area surrounding the river is managed by various local government authorities and NSW Government agencies.

The land adjacent to the Georges River was occupied for many thousands of years by the Tharawal and Eora peoples. They used the river as an important source of food and a place for trade. 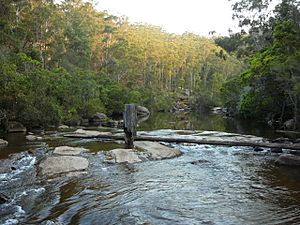 From its source east of Appin within heath habitat of Wollondilly Shire & Wollongong Local government area, the Georges River flows north through rugged sandstone gorges to the east of Campbelltown, roughly parallel to the Main South railway line, with its eastern bank forming a boundary of Holsworthy Army Base. At Glenfield it reaches the urban environment and then travels to Liverpool where the river turns east and flows past the suburbs of East Hills, Lugarno, and Blakehurst, before emptying into Botany Bay at Taren Point in the southern suburbs of Sydney, where it joins with the estuarine catchment.

Major tributaries include O'Hares Creek, Bunbury Curran Creek, Cabramatta Creek, Prospect Creek, Salt Pan Creek and the Woronora River. The Georges River is popular for recreational activities such as water skiing and swimming. The banks of the river along the lower reaches are marked by large inlets and indentations overlooked by steep sandstone ridges and scarps, many being home to expensive residential properties.

The Georges River features some artificial lakes in the suburb of Chipping Norton, near Liverpool. These lakes, known as the Chipping Norton Lakes, are the result of sand mining and quarrying operations in the twentieth century. The Lakes are now a popular watersports and recreational facility for the residents of the south-western suburbs of Sydney.

Georges River National Park adjoins the upper reaches of the Georges River. From Appin to Glenfield, a large corridor has been protected as part of the Georges River Regional Open Space Corridor. Council reserves allow for access to natural sections of the river at Simmo's Beach, Ingleburn Reserve, Keith Longhurst Reserve, and Frere's Crossing.

Prior to the arrival of Europeans, Georges River was formerly known as Tucoerah River by the traditional custodians of the area.

The Georges River was given its English name in honour of King George III, by Governor Arthur Phillip. It was one of the many sites of the Hawkesbury and Nepean Wars, a series of wars between the Kingdom of Great Britain and the resisting Indigenous clans in the late 1700s and early 1800s.

The river was explored by Bass and Flinders in 1795 on their first voyage on the Tom Thumb after their arrival in New South Wales. The exploration led to the establishment of Bankstown .

A dam was constructed by David Lennox using convict labour at Liverpool in 1836, as a water supply to Liverpool.

In February 2007, Liverpool and Campbelltown City Council were awarded a $2 million grant from the NSW Environmental Trust under their Urban Sustainability Initiative. The grant was to allow the councils, in conjunction with Wollondilly Shire Council and the Georges River Combined Councils Committee, to develop a Comprehensive Strategic Plan focused on the rehabilitation of the catchment area. 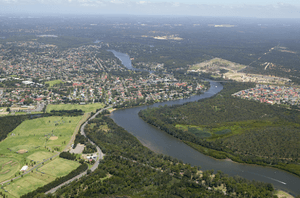 View of the river as it passes through East Hills and Voyager Point. The Voyager Point footbridge and the East Hills railway line bridge can be seen in the middle distance

Bridges over the Georges River include from east to west: 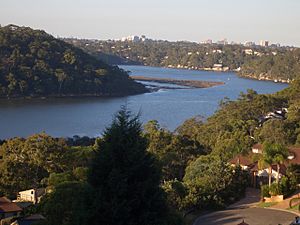 The Georges River is a popular area for recreational fishing. Species present in the river include bass, bream, whiting, yellowtail, jewfish and flathead. The river is also host to a number of commercial oyster farms. The upper ends of the Georges River are abundant with Bass during the summer months and during the winter months these bass migrate down to the lower ends of the river towards the salt water to breed. Waste water inflows to the river are carefully managed to maintain the estuarine habitat.

All content from Kiddle encyclopedia articles (including the article images and facts) can be freely used under Attribution-ShareAlike license, unless stated otherwise. Cite this article:
Georges River Facts for Kids. Kiddle Encyclopedia.