Glenfield is a suburb of Sydney, in the state of New South Wales, Australia. Glenfield is located 40 kilometres south-west of the Sydney central business district, in the local government areas of the City of Campbelltown and the City of Liverpool. It is part of the Macarthur region.

Glenfield was named after the property founded by early colonial surgeon and explorer, Charles Throsby. According to local authorities and Campbelltown City Library, the property was named after the Glenfield in Leicestershire, England, where Throsby was born and brought up. Many of the streets in the suburb have links to British names, such as Canterbury Road, Cambridge Avenue and Trafalgar Street.

The name was first used when Glenfield railway station was built in 1869 although a village didn't begin to develop until 1881 when the first subdivision of the paddocks were marketed. A public school opened in a tent the following year and a local post office was established in 1899. Hurlstone Agricultural High School also moved to Glenfield in the 1920s. However, the suburb did not really develop until the 1950s and 60s.

Glenfield gained notoriety in 1968 as the site of a hostage siege which ended in bizarre circumstances with the NSW Commissioner of Police Norm Allen acting as witness to the wedding of gunman Wally Mellish and hostage Beryl Muddle. The incident was made into the movie Mr Reliable starring Colin Friels and Jacqueline McKenzie. 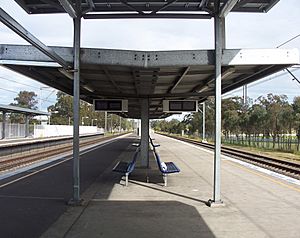 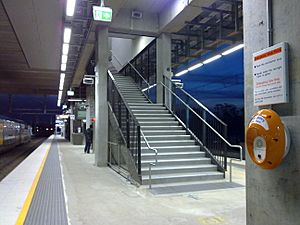 Recently upgraded platforms 1 and 2 of Glenfield station, with stairways leading to an overhead concourse.

Glenfield railway station is a major interchange station for South-West Sydney. It is the junction for the Revesby and Granville branches of the Airport, Inner West & South Line on the Sydney Trains network. The station received a major upgrade as part of the South West Rail Link, including construction of an overhead concourse, multi-storey car park, new, fourth platform and conversion of a terminating platform to a through platform. The new railway line west to Leppington opened on 8 February 2015, meaning trains now serve Glenfield from the north, south, east and west.

The M5 South Western Motorway and Hume Highway sit on the western border of Glenfield. Additionally, the Westlink M7 is also close to its western border.

All content from Kiddle encyclopedia articles (including the article images and facts) can be freely used under Attribution-ShareAlike license, unless stated otherwise. Cite this article:
Glenfield, New South Wales Facts for Kids. Kiddle Encyclopedia.