The South West Rail Link is a railway line serving the developing suburbs of south-western Sydney, Australia between Glenfield and Leppington. Services form part of the Sydney Trains commuter rail network. It opened on 8 February 2015.

The line consists of a 11.4 km (7.1 mi) double-track railway, with stations in the suburbs of Leppington and Edmondson Park. The line is the major piece of public transport infrastructure for the Sydney metropolitan area's "South West Growth Centre". It connects with the rest of the Sydney rail network at Glenfield, where services can continue north on the Main South line or east on the East Hills line. Leppington station's four platforms can support frequent terminating services, even after any extension of the line. A train stabling facility to the west of the station further enhances this capability. Development of the project was managed by Transport for New South Wales and its predecessor, the Transport Construction Authority.

In March 2008, the Iemma Government indicated that construction would begin in 2009, with completion scheduled for 2012. By October of that year the government had decided that delivery of the project would be divided into two stages. Stage one would comprise preliminary work around Glenfield station, and stage two would comprise construction of the new line itself, stage two was deferred due to budget cuts. On 14 November 2009, Premier Nathan Rees announced that construction of stage two of the South West Rail Link would begin in mid-2010, with completion scheduled for 2016. 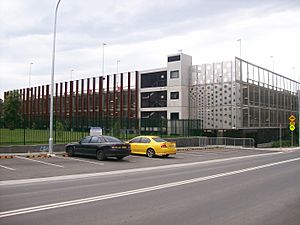 Planning approval for stage one of the project was received in April 2009. This stage involves preliminary work to support the new line. It is centred on Glenfield station and includes: 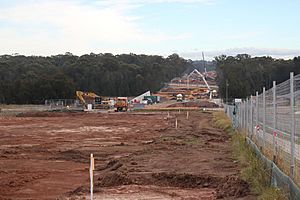 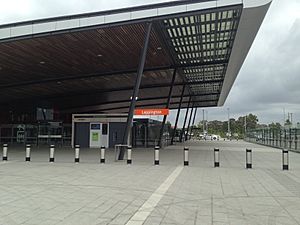 Stage two received planning approval on 18 November 2010. On 7 December 2010, Premier Kristina Keneally announced that a contract for design and construction of stage two had been awarded to the John Holland Group.

On 13 September 2014, the NSW Government announced that construction was complete, saying the line had come in $300 million under budget and a year ahead of schedule. The line opened 8 February 2015.

On 6 November 2014, the NSW Government announced that train testing had commenced on the line. Passenger services began on 8 February 2015, initially as a four carriage shuttle running every 30 minutes between Leppington and Liverpool. The shuttle stopped at all stations except Casula and was also branded as the South West Rail Link. From 13 December 2015, trains operate as part of the Airport, Inner West & South Line. Some services operate to the city via Granville while others continue to terminate at Liverpool. Cumberland Line services to Schofields are to be introduced in 2017.

It has been proposed that the line be extended from Leppington to the Western Sydney Airport at Badgerys Creek. However, as at 16 April 2014 the Federal Government has said it had no plans to build a train line. It did indicate a provision for the train line would be included in the development, this may include preparing the tunnels under the runway as part of the runway construction and preparing the underground space for a station.

From Leppington, the line would extend to Rossmore, with a northern branch to Bringelly and a southern branch to Narellan. Proposed stations would be located at Rossmore, Bringelly, Maryland, Oran Park and Narellan. Preliminary investigations for an extension of the southern corridor from Narellan to the Main South railway line have also commenced. In March 2017, a consortium of SNC-Lavalin, Aquenta, Architectus, Norman Disney & Young, SMEC Holdings and Stacey Agnew were appointed to conduct a design feasibility study for submission to the Federal Government.

Further corridor preservation, between Bringelly and St Marys, is being investigated together with planning for the Outer Sydney Orbital, a corridor for a north-south motorway and freight railway.

All content from Kiddle encyclopedia articles (including the article images and facts) can be freely used under Attribution-ShareAlike license, unless stated otherwise. Cite this article:
South West Rail Link Facts for Kids. Kiddle Encyclopedia.