Macquarie Fields is a suburb of Sydney, in the state of New South Wales, Australia. Macquarie Fields is located 42 kilometres south-west of the Sydney central business district, in the local government area of the City of Campbelltown and is part of the Macarthur region.

Macquarie Fields has a mix of public and private housing and is surrounded by bushland. Nearby Macquarie Links, is a high-security housing estate beside an international standard golf course.

The original inhabitants of the Macquarie Fields area were the Darug people of western Sydney. The rich soil of the area was home to an abundance of plants which in turn attracted animals such as kangaroos and emus, both of which along with yams and other native vegetables and fruit were part of the diet of the Darug. They lived in small huts called gunyahs, made spears, tomahawks and boomerangs for hunting and had an elaborate system of tribal law and rituals with its origins in the Dreamtime. However, following the arrival of the First Fleet in 1788, they were pushed off their land by the British settlers.

Macquarie Fields was named by early landholder James Meehan in honour of the Governor of New South Wales, Lachlan Macquarie. The area was surveyed by Meehan in the early 19th century. Although transported to Australia as a convict for his role in the Irish Rebellion of 1798, Meehan had trained as a surveyor in Ireland and in 1803 was appointed assistant to NSW Surveyor-General Charles Grimes. In 1806 he was granted a full pardon and in 1810 became Surveyor-General. For his work, he was granted a number of parcels of land including 2,020 acres (8.2 km2) in what is now Macquarie Fields and neighbouring suburbs. He used the rich soil to grow cereal crops, fruit trees and to graze livestock.

The property changed hands a couple of times after Meehan's death and in the 1840s, Samuel Terry built a Regency mansion, Macquarie Fields House, which still stands to this day. It is now listed on the Register of the National Estate. In 1883, then owner William Phillips subdivided the land to create a new town he called Glenwood Estate with grand boulevards and fine buildings. A railway station was added to the line in 1888 but the depression of the 1890s meant the grand town failed to materialise with only a few small houses built on the lots. In the next Great Depression of the 1930s, the area became popular with the homeless who made makeshift huts not unlike those of the earlier Darug people.

After World War II, the village grew steadily. A public school was opened in 1958 and by 1971, the population reached 3700. In the mid 1970s, a large Housing Commission development was built on the east side of town and given the suburb names of Bunbury (later Guise) and Curran after the local creek. Residents of the privately owned areas of Macquarie Fields were strongly opposed to the new developments being included in their suburb and this continued well into the 1980s. Since that time, local authorities have tried to blend the area into a single suburb. Private housing developments sprung up further around and the weight of population contributed to a larger town centre.

Macquarie Fields gained notoriety as the location of riots in 2005. 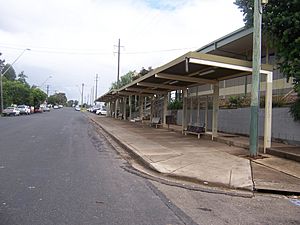 The town is home to Macquarie Fields Leisure Centre, which contains an indoor aquatic centre and an outdoor olympic sized swimming pool. It also encompasses a gymnasium and indoor sports facilities. There is also a number of sporting fields in the town. Sporting fields include Hazlet Oval, Monarch Oval and Third Avenue.

Macquarie Fields is a suburb with a diverse community. According to the 2006 Australian Bureau of Statistics Census, it had a population of 12,973 people. Languages spoken in the area included Arabic (4%), Samoan (2.8%), Hindi (2.6%), Bengali (2%) and Spanish (1.8%). The unemployment rate (10.6%) was more than double the national average and the median family income ($1005 per week) was slightly lower than average. The most common occupations were clerical and administrative (18%), technicians and tradespeople (16%), labourers (15%) and machinery operators and drivers (14%).

All content from Kiddle encyclopedia articles (including the article images and facts) can be freely used under Attribution-ShareAlike license, unless stated otherwise. Cite this article:
Macquarie Fields, New South Wales Facts for Kids. Kiddle Encyclopedia.