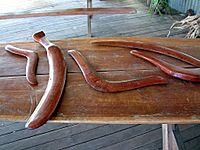 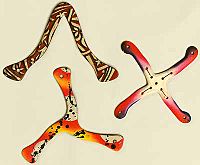 A boomerang is a flying tool that is best known for its ability to return to the thrower. In the past, it was made of wood, but most of the modern boomerangs are made of other materials.

Most people know that Australian Aborigines used boomerangs for hunting. But the oldest boomerang was found in a cave in Poland and is more than 20,000 (twenty thousand) years old. This kind of boomerang does not return to the thrower, but it can fly longer distances and more stably than other things which can be thrown. These days (returning) boomerangs are usually used for recreation.

A boomerang is not thrown like a frisbee. It has to be thrown almost vertically, with an inclination of about 10–20 degrees and with a lot of rotation (spin). When facing the wind, throw with an angle of 30–45 degrees to the right (left-handed: to the left) of the wind. Be sure to choose a field that is big enough. Watch out for passers-by, and do not throw when people are standing in the range of the boomerang. See also the link provided in the section below.

There are a lot of boomerang clubs in many countries all over the world. These clubs organise workshops and tournaments. The best boomerang-throwers come from Australia, France, Germany, Japan, Switzerland and the United States of America. A few years ago, the International Federation of Boomerang Associations (IFBA) was founded to help to spread knowledge about boomerangs.

All content from Kiddle encyclopedia articles (including the article images and facts) can be freely used under Attribution-ShareAlike license, unless stated otherwise. Cite this article:
Boomerang Facts for Kids. Kiddle Encyclopedia.