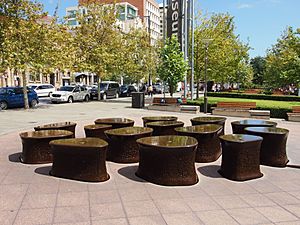 The water feature 14 Pieces by Angela and Hossein Valamanesh, in front of the South Australian Museum, is based on the forms of ichthyosaur vertebrae. 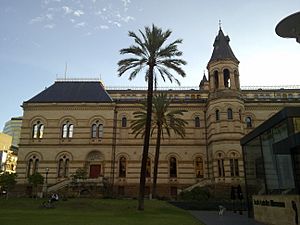 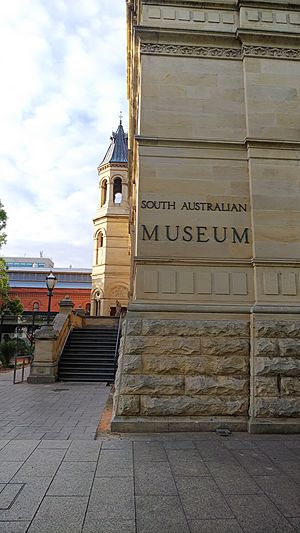 The South Australian Museum is a natural history museum and research institution in Adelaide, South Australia, founded in 1856 and owned by the Government of South Australia. It occupies a complex of buildings on North Terrace in the cultural precinct of the Adelaide Parklands. Plans are under way to split its Australian Aboriginal cultural collection (the largest in the world), some of which will be housed in a new building housing these along with other works of art, in a new National Gallery for Aboriginal Art and Cultures.

The South Australian Institute, incorporating a public library and a museum, was established in 1861 in the rented premises of the Library and Mechanics' Institute in King William Street while awaiting construction of the Institute building on the corner of North Terrace and Kintore Avenue.

Frederick George Waterhouse offered his services as curator of the South Australian Institute Museum in June 1859 in an honorary capacity. When the Institute building was completed, the Board appointed him as the first curator, a position he held until his retirement in February 1882. He was succeeded by Wilhelm Haacke, who in January 1883 recommended the South Australian Institute Museum be renamed the South Australian Museum (which did not happen then), and the position of Curator be changed to Director. Haacke was appointed the first Director, but only held the position until he resigned in October 1884 after a series of disputes with the Museum's management

The following decade, Mike Rann, Premier and Arts Minister from 2002 to 2011, funded the redevelopment of the Pacific Cultures Gallery and the development of the South Australian Biodiversity Gallery. In 2011 Mr Rann appointed former Adelaide Lord Mayor and Education Minister Jane Lomax-Smith AM as chair of the Museum Board. In November 2020 Mr Kim Cheater was appointed as Chair of the Museum Board.

...the conservation, study and appreciation of nature and culture for the benefit and enjoyment of current and future generations. The Museum’s exhibitions, collections, programs and science research activities contribute to global understanding of human cultures and the natural world as well as supporting life-long learning in the community.

Its vision is to "...use [its] world-class collections to create and share new knowledge, focusing on Australian Aboriginal and Pacific cultures, Earth and Life Sciences".

The Director is as of April 2019[update] Brian Oldman (appointed December 2013).

As a statutory corporation, management of the museum is prescribed under the South Australian Museum Act 1976 and State and Federal Government regulations. The museum was a division of Arts South Australia (previously Arts SA) within the Department of State Development until 2018. After the election of the Marshall government in March 2018, the Arts Ministry was removed, Arts SA was dismantled and its functions were transferred to direct oversight by the Department of the Premier and Cabinet.

The Board of eight people appointed by the Minister, chaired by Mr Kim Cheater, oversees the management of the Museum.

The South Australian government is committed to splitting the Museum, retaining a natural history museum on its existing site and creating a new gallery for Aboriginal art and culture on the site of the old Royal Adelaide Hospital, now known as Lot Fourteen. In early 2019 a consultation process was begun, involving the state government, the Museum, the Art Gallery of South Australia, the State Library, Tandanya National Aboriginal Cultural Institute and South Australia's Aboriginal communities, in particular the Kaurna.

An update on the Lot Fourteen gallery was announced by Premier Steven Marshall in February 2020, with a scheduled completion date of 2023.

The museum houses over four million objects and specimens. Permanent galleries include:

The museum contains the most significant collection of Australian Aboriginal cultural artefacts in the world, housing about 30,000 objects. This collection, along with several others in the museum, is being digitised, with many images and a great deal of data about each item now available for online browsing.

In 2016, a private benefactor, Margaret Davy AM, provided funding for a new position for an Indigenous curator for five years, which she requested be named in honour of her late husband, William Geary. This position is known as The William and Margaret Geary Curator of Aboriginal and Torres Strait Islander Art and Material Culture, with the first appointee being Glenn Iseger-Pilkington, a Wadjarri, Nhanda and Nyoongar man from Western Australia with a background in art curating. This was the first time in the history of the museum that a lead curatorial role had been designated for an Indigenous person, and it is hoped that the collection will be developed in a way informed by Indigenous voices and worldview, and also help to make it, in the words of Iseger-Pilkington, "more relevant and accessible to Aboriginal and Torres Strait Islander communities".

The museum holds the biggest collection of carvings by Arrernte artist and anthropological interpreter Erlikilyika, also known as Jim Kite, who lived at the tiny and remote European settlement at Charlotte Waters telegraph station. It also holds a bound sketchbook of 24 pencil drawings of native trees, created during the Spencer and Gillen expedition and bought by Herbert Basedow before being acquired by the Museum, as well as photographs of "Jimmy Kite" and other related materials.

For general article, see Repatriation and reburial of human remains.

A new museum policy has committed to the repatriation of returning the ancestral remains of about 4600 Old People, currently held in storage at the museum, to Country. Some of the remains now being returned from overseas institutions were "collected" by men like former Museum Director Edward C. Stirling, University of Adelaide Professor Archibald Watson and physician and city coroner William Ramsay Smith (who also bought remains stolen from burial grounds at Hindmarsh Island). However these numbers are small when compared with the vast majority of the remains, which were disturbed by land clearing, construction projects or members of the public.

An Aboriginal heritage and repatriation manager, Anna Russo, was appointed in 2018 as part of a wider restructure to make repatriation and Aboriginal agency a priority for the museum. Kaurna elder Jeffrey Newchurch had been lobbying the museum for years, and SAM Head of Humanities John Carty said the Museum was one of the last cultural institutions in Australia to return ownership and management of ancestral remains to Aboriginal people.

On 1 August 2019, the remains of 11 Kaurna people were laid to rest at a ceremony led by Newchurch at Kingston Park Coastal Reserve. Carty said the museum was "passionate" about working with the Kaurna people to repatriate their ancestors, and would also be helping to educate the community about what it means to Aboriginal people. The Museum continues to receive further remains, and together with the community would need to find a good solution to accommodate the many remains of Old People, such as a memorial park.

People associated with the Museum

All content from Kiddle encyclopedia articles (including the article images and facts) can be freely used under Attribution-ShareAlike license, unless stated otherwise. Cite this article:
South Australian Museum Facts for Kids. Kiddle Encyclopedia.