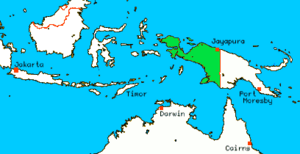 Western New Guinea is the western half of the island of New Guinea. As of 2006, it is internationally recognised as Papua, a province of Indonesia. It was previously known by various names, including Netherlands New Guinea (until 1962), West Irian (1962-1973), and Irian Jaya (1973-2000). The incorporation of western New Guinea remains controversial in some quarters, including some within the area itself, and those who do not recognise the legal issues of Indonesia's claim to the area, calling it West Papua.

Papua was annexed by Indonesia under the controversial Act of Free Choice in 1969. In 2003, the Indonesian central government declared that the province would be split into three areas: Papua Province, Central Irian Jaya, and West Irian Jaya. Opposition to this resulted in the plan for Central Irian Jaya being scrapped, and even the designation of West Irian Jaya Province is still legally unclear. The independent sovereign state of Papua New Guinea (PNG) borders Papua Province to the east.

All content from Kiddle encyclopedia articles (including the article images and facts) can be freely used under Attribution-ShareAlike license, unless stated otherwise. Cite this article:
Western New Guinea Facts for Kids. Kiddle Encyclopedia.